Okay, maybe we should’ve trained. Today felt a lot longer than 50 miles (technically it was… keep reading) and was deceptively more hilly than the “no need for elevation maps” the ACA would lead you to believe.

We started early, 6:30 am to beat rush hour traffic. We had to ride 2 miles to the official start in the rain, which wasn’t nearly as cold as I was anticipating. The rain subsided and we had a smooth and easy ride through a really ritzy neighborhood with beautiful houses. Definitely some major wealth in that part of the city. Unfortunately, that’s where the smooth ended. Trying to find the pedestrian path to cross the Alex Fraser Bridge was a complete nightmare. The signs in Canada are less than helpful, especially when they point you in the wrong direction and leave you to wander a highly trafficked industry area for over an hour, tacking on useless mileage. Needless to say, I am not a fan of this Alex Fraser character.

Regardless, we made our way across and were greeted with Hill after hill. But, on a gloomy day, we found a Ray of sunshine. We set up to eat lunch in front of a strangers house, when that stranger pulled in not 2 minutes later. He came out to greet us and we had a little chat. He offered us to use his “washroom”, Canadians are too proper for bathrooms apparently, and wished us luck on our journey. Ray certainly showed why Canadians are considered such friendly people. He wasn’t the only person to offer a helping hand in a time of need. In search of a bathroom after many rejections, we stumbled into a supplement store with a really super friendly dog. We chatted a little with the owner who offered us a pre-workout drink to fuel our journey. Having to tackle a seemingly never ending hill, the drink is what got us over the hump.

As we approached the USA border, we stopped at a bistro cause I grossly underestimated how much food I need and I was ready to devour whatever I could find. To celebrate leaving Canada, we ordered the country’s signature dish – poutine. I can’t attest for how it tasted, cause I wolfed it down so fast, but I know it hit the spot!

Crossing the border was quite the experience. Wanting to celebrate our entry to the Motherlnd, we attempted to take pictures. Not realizing it was frowned upon, we were descended upon by a border patrol agent (live action picture below) and herded into the border patrol office. The guy who checked our passports was very friendly and wrote the offending officers a snarky note and took pictures of us in front of the border plaque. 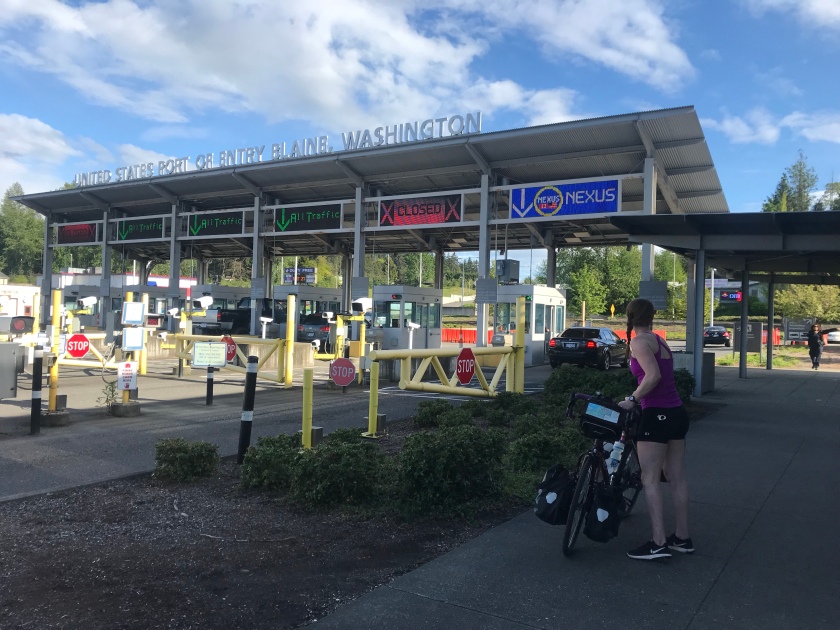 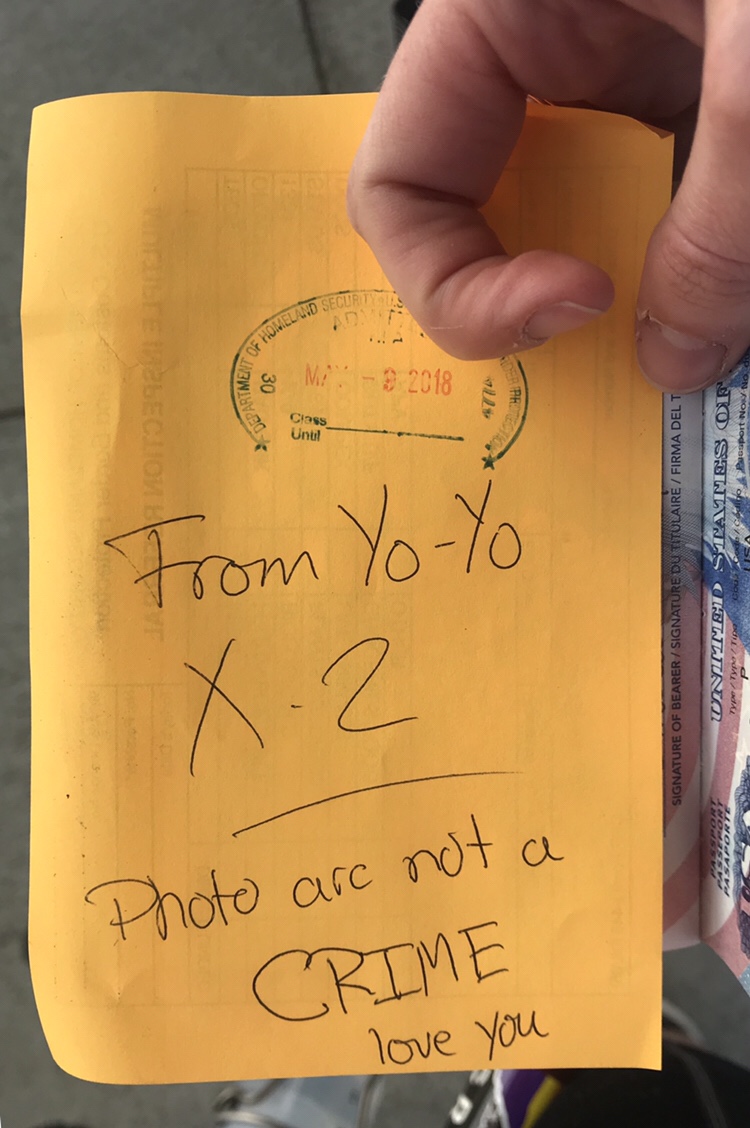 The adrenaline of knowing we only had 10 miles left paired with the food we got at the border fueled a quick ride to the campground. So quickly, in fact, that we were literally going faster than a freight train. And eventually had to wait 15 minutes for it to pass so we could cross the street.

A few of the roads we rode on were relatively scary… no shoulder, heavily trafficked. However, the motorists were all relatively respectful and passed with plenty of room.

We’re staying at a state park in Birch Bay, and it’s extremely gorgeous. Due to the threat of rain and being the only ones in the campground, we decided to camp under a pavilion. It was perfect! We had dinner and set everything up. But wait, Not so fast! Here comes ranger Rick saying we couldn’t camp there and told us to move. Here it is, 9 at night, pitch dark, all of our stuff set up, and we had to move it. Not only up a huge steep hill, but now in the rain. Rules are rules and we did it without complaining, but man would it be nice to not have to break down a wet camp in the morning. Oh well.

But alas, the saga doesn’t end there! After moving everything, we went to get showers. We realized in despair that it was quarter showers, and we were quarter less. Sink showers it is!

All in all, surely not the greatest of days. But it can only go up from here on out!

During my time out in the Tahoe area, I made wonderful connections with very generous people. One couple was so kind and supportive to offer to watch Addie while I finished the hike. Knowing she was in good hands, I took them up on their gracious offer and I headed back on the trail. However, without Addie, my heart was not into it. For the first time, my mental state took me out of the game. After putting in another 66 miles, I had enough. After all, I was supposed to be sharing this experience with Addie, not a BILLION mosquitos (and 2 very curious bears who would not leave me alone). I got out of the trail what I wanted and didn’t see a point in finishing. I have learned a lot about failure and humility on this trip, and I think this spring is my last hoorah for a while. I got out of my youth some pretty awesome adventures, but I’m ready to move on to new ones. 🦟 🥾 🐻 🏔
After 3.5 days and 43 miles, Addie told me she’s had enough. She is one resilient pup, but life on the trail was a little too rough on her and that little tail of hers stopped wagging. Plus with the oppressive heat wave, the trail is no place for a dog. So we’re headed into town to clean up (she has never been this dirty before) and come up with a game plan - I’ll likely be back. It was a dream getting to share this experience (and all my snacks) with my bear sniffing babe, but as my mom so eloquently put it, “A broken heart over not finishing a hike heals much easier than a broken heart over a beloved broken dog” 😭🐾🥾
Starting tomorrow, Addie and I will be attempting to hike the Tahoe Rim Trail (TRT), a 165 mile backpacking trek that loops around Lake Tahoe. I say “attempting” very purposefully. While Addie has done many multi-night hikes, this is by far her most ambitious endeavor yet. Given that she’s as close to a child as I have right now, her safety, happiness, and health are my number one priority and trumps even my pride of completing this goal. So as soon as that tail stops wagging, we’re outta there. But if the acclimation hike in CO is any indication, she’ll be just fine. She is one tough cookie! Wish us luck and hope that the drought, thunderstorms, and potential wildfires don’t throw any curveballs our way🐶 🎒 🥾 🏔
Ride my bicycle across the United States (again): ✅✅