Today started out like yesterday, but ended like Friday. The hills got steeper as the day progressed and the sun grew hotter. It definitely didn’t help that it was an awful night sleep in Hartville. No one had a restful night. Between trucks with ridiculously loud engines circling the block, herds of loud teenagers, and an animal in the throes of death at 3am, it was a difficult and exhausting 75 miles into Ash Grove. But we persevered.

The Ozarks are still trouble makers, but we’ll be in flat Kansas in no time. The one thing I noticed in Missouri (besides ruthless drivers that like to run us off the roads) are the crazy amount of bugs. Riding down the road you can see them
zipping all over. From flies, to bees, to beetles, you can’t escape them. As I type this, a fly is banging repeatedly into a window. Some are kamikazes and fly directly into us. Usually it’s just an annoyance, but when going downhill really fast, getting hit by 4 bugs in a row really hurts. Thankfully I have sunglasses to protect my eyes. One bug had the misfortune of being splattered against the lense. The sunglasses don’t work, however, when the bug flies into the glasses and gets stuck. Luckily I kept cool and collected and didn’t fly off my bike.

During the ride, my chain came off and got stuck in my gears, making my bike inoperable. Thankfully, Alec was right behind me and jumped off his bike and came to my rescue. His 19th birthday is coming up, and his awesome parents came down from Kansas City with a barbecue to celebrate. It was absolutely amazing and perfect after today’s ride. They are also making breakfast and I can’t wait for that!

Tomorrow is our last day in Missouri. Hopefully Kansas greets us kindly! No pictures from today. Scenery was beautiful though!

I’m happy to say that today was just an overall good day. It started off great after a refreshing night’s sleep in a real bed. I haven’t slept that well in quite some time. It was really tough rolling out of bed, but a 60 mile day was waiting for us. 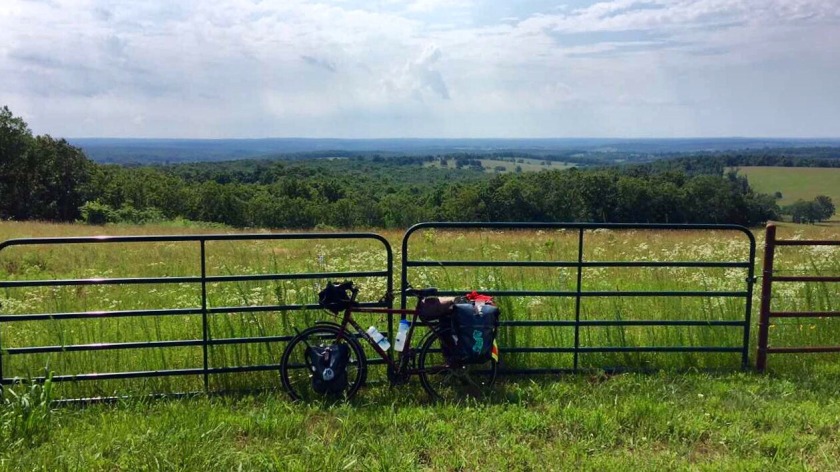 The terrain was great, with only a few minor steep climbs. Nothing too crazy. The weather also held out for us. Though the sun was out, it stayed relatively cool. Compared to the last couple days of 100 degree heat, today’s 90 felt like a cool spring day. We stopped in someone’s driveway for a quick snack. While doing so, the house owners came home and spoke with us briefly. They offered their spigot for water and told us to grab blueberries from their blueberry bush. We used the spigot to hose ourselves down and had a handful of blueberries. They were by far the best blueberries I have ever tasted.

The best part of the day was Monty, a good friend from college, coming to visit. He is stationed in Fort Leonard Wood and took the time to drive over an hour to visit. We went out for dinner and caught up. It was great seeing him and a good morale boost. Tomorrow is a longer ride, but it will mark the end of the Ozarks!!

Wednesday:
The last few days have actually been nice with rolling hills and slight overcasts. The heat has been bearable. I’m definitely used to the 530am wake up calls and being outside all day biking. It’s so relieving to finally be in that routine.

We had a much needed layover day in Carbondale, Il. Emilie and I got our bikes tuned up. Hers was “immaculate” and mine not so much. I am just a bit too clumsy. They are now riding wonderfully as we enter into Missouri. However, I write this as we all sit and wait to cross the Mississippi River by police escort… 3 hours later…

Immediately after I wrote this, we encountered high winds holding us back and nice steep climbs. I always speak too soon… However, a couple completely changed the evening around. Tina and Doodle offered the whole team showers and relaxation. They were just complete angels. I am so fortunate to have met them.

Thursday:
First 75% of the ride, great… last 25%, hell. On the bright side, I currently have my tent set up next to a beautiful river watching the lightening far in the distance. It’s so peaceful.

Friday:
The Ozarks have been pretty tough, but thankfully today it rained and was pretty chilly for the first 40ish miles. Then Emilie and I made the best decision of the trip. We got a motel room and it’s amazing. I so badly needed a nice shower and a bed.

Saturday:
Today was one of my favorite days. Beautiful weather with relaxing rolling hills for the majority of it.

Today I understand why Missouri and misery sound so similar, and the Ozarks are all to blame. They are steep little boogers that take every ounce of energy out of you to get up. Going up certain hills feels like you have 1,000 pounds strapped on the back of your bike. The jury is still out on whether they are better/worse than the Appalachians. I’m not too proud to say that tears were shed transversing the mountains. During mid crying episode, a few racers passed by and it took all I had to get my act together to say, “good job!”. They probably looked at my teary snotty face and thought I was crazy, but I’m hoping they found it at motivation, because at least they were having a better day than me!

The day started with cold rain (yes, for once this trip we were actually cold, and it was amazing). The only bad thing about the rain was it made my pedals slippery and visibility was poor. Taking advantage of the downhills was also tricky because it was painful to go fast down, as the rain felt like tiny daggers. During one dry spell, I reached my top speed of 43.2 MPH. I didn’t even realize it until after the fact. The crazy thing is I was braking throughout the decent.

At the end of the ride, we went up a fire tower for a birds eye view of the Orzarks, as there are no scenic overlooks. I was severely disappointed when I made my way up, as the “mountains” looked flat and unimpressive. All of our hard work was not represented in the least! I hope the next 2 days have more representative views than today’s.

The cars and logging/coal trucks are still as rude as ever, but everyone was safe.

Sheena and I opted for a hotel tonight, and it is the greatest decision we have made yet on this trip. It’s not the fanciest room, but it does the trick. We have forgotten how amazing real pillows are!

Today was 60.5 miles, tomorrow is a similar day. Here’s to hoping the Ozarks will have more mercy on us!

Best news of the day: Addie is visiting out in Colorado!! 😄😄

Before doing any research on this trip, I had never heard of the Ozarks. But today, we got very well acquainted with them. I heard mixed reviews of them from past riders, that they were harder than the Appalachians with others claiming they were easier. Today definitely felt like we were back in Virginia, but they weren’t nearly as bad. 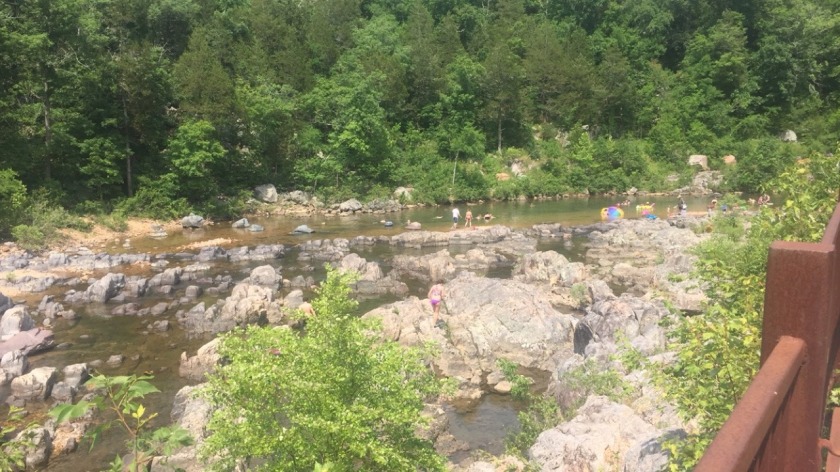 We set out early due to threats of 100+ degree heat. It was a hilly ride, but like I said before, nothing too crazy. We took multiple rest breaks to manage the heat. One break was at Johnson’s Shut-In, a really cool “watering hole” that is kind of hard to explain. It had rocks in the river and was kind of out of this world. It was nice to soak in the cool water during the heat of the day. We even got in a quick little nap before embarking on the last 12 miles to Centerville, which were my favorite part of the ride, mainly because it’s my favorite time to ride (5:30pm). It was a bunch of rollers with some pretty steep hills thrown in there. Even though it was cooler than the rest of the day, we were still dripping in sweat within 5 minutes.

The worst part of MO, by far, are the drivers. We have been aggressively honked/revved/cursed at. There is no shoulder for us to ride on, so the cars will purposely pass extremely close to us even when there is room to cross over the center line. It is extremely stressful riding conditions, and I wish I could give the drivers a piece of my mind, but I promised my parents I wouldn’t. Because like they warned me before I set out, you never know what crazy may have a gun. Words of wisdom. 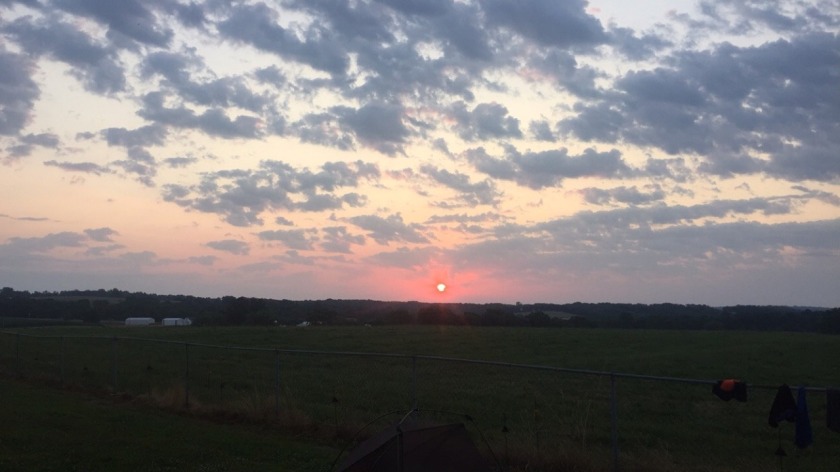 Last day in Illinois today! We ended it with a very flat (yes, I dare utter the word) ride into Chester, home of the infamous Popeye. We were able to get in 50 miles before 11:30am, a new record. That was due solely to the fact that the terrain was the flattest we’ve seen on this trip yet. It was fantastic. I jinxed myself in yesterday’s post where I said we were doing well with reading the map. We made a wrong turn today and ended up adding 5 miles to our trip. But because it was flat, it was no big deal.

Chester was a really cool city, a lot different than the Chester I’m used to. Popeye was everywhere and it had a lot of cute little shops. It was so nice, in fact, that we stayed there for 4 hours. Not of our own choice, however. The bridge to cross the Mississippi River into MO from Chester is narrow without a shoulder. It is also frequented by coal trucks and is not safe for cyclists. We had to wait for a police escort to shut down the bridge for us to cross. The police were unfortunately busy with a homicide (now that sounds like the Chester I know) and got there when they could. When they did arrive, we had the whole bridge to ourselves and crossed, which was pretty neat.

Missouri welcomed us with heat and wind. Fortunately, the first 8 or so miles were flat, but also barren. We got our first taste of what KS will likely be like. We were not huge fans. The rest of the ride turned hilly, but nothing too substantial. We are staying at a church in Ozora. The church itself does not have showers, but we were lucky enough to be blessed by two angels, Tina and Oliver, who welcomed us to use theirs. They live across the street from the church and frequently invite cyclists to use their showers or whatever they need. They were extremely friendly and we are truly appreciative of their help!

70 miles today, including our 5 mile misstep