Leaving Big Sur for last sure wasn’t a mistake. The short ride today proved that. We had a good ride out of Monterey fueled by an hour long coffee break 0.3 miles into the ride. We earned it!

With the sky darkening, we got spit on a little, but nothing substantial. We soon found ourselves along the coast with the most supportive drivers. Everyone was honking and waving at us, cheering us on! That helped brighten even more the gorgeous views we were riding by. But with good views comes…. wind! However, after paying our penance to the wind gods yesterday, we again were on the favorable side of the winds. They were violent at times but I won’t complain anymore lest they turn against us tomorrow. The wind gods must have very fragile egos.

Because we knew we had such a short day today, we took our time with breaks and pulled over a plentiful amount to take pictures. We stopped by the picturesque bridges I’ve seen a million times in photos so we spent a great deal of time there. 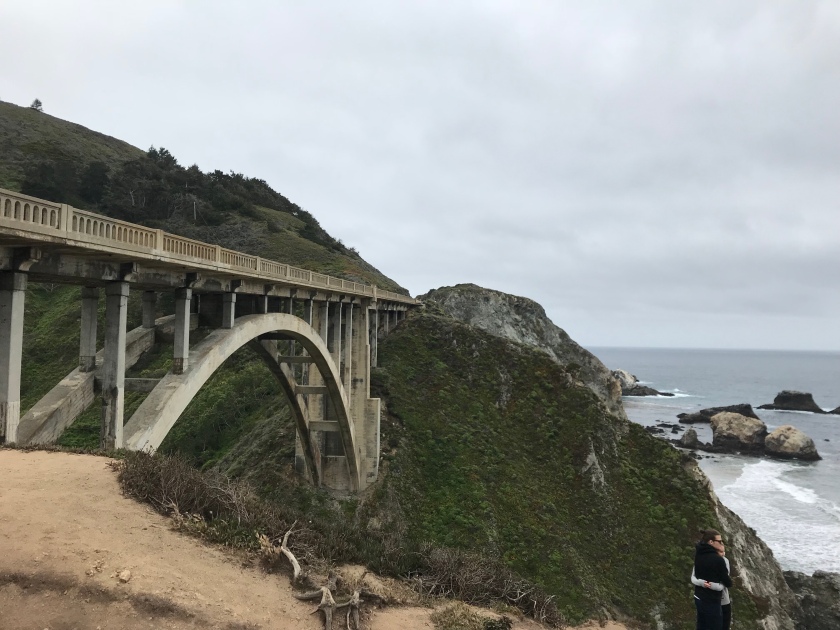 The sun came out and the clouds disappeared and totally changed the look of the environment. Bathed in sunshine, the blues of the sky, greens of the grass, and every color in between of the wildflowers shined brightly and danced in the wind. 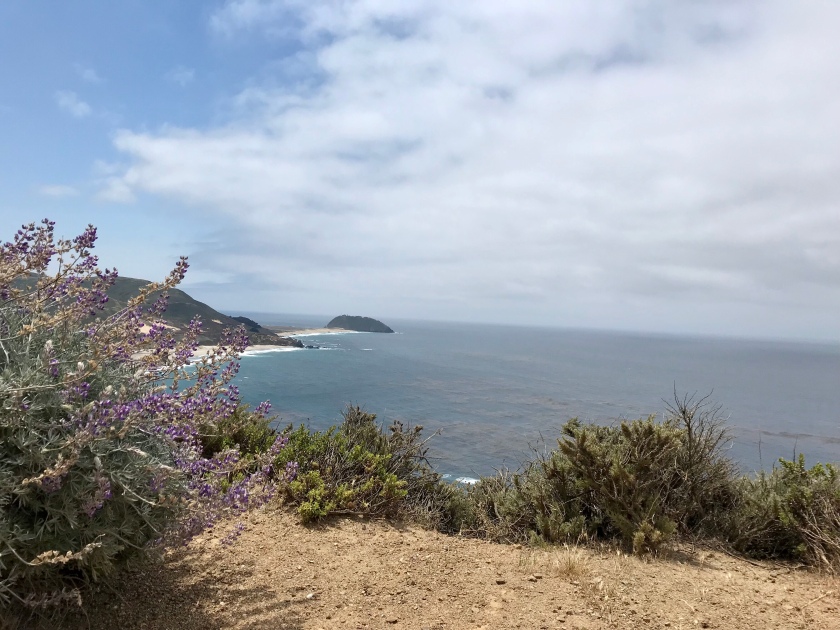 We spent a long time in just about every general store along the way for WiFi to try and figure out exactly where the campground we planned on staying in was actually located. It’s like the Bermuda Triangle out here… nothing on a map is actually where it says it is, and if the ocean wasn’t always on our right, we’d be totally disoriented.

But alas we found ourselves at Pfeiffer Big Sur State Park. It has a wonderful hiker/biker campground that we’re sharing with 6 other cyclists, none of whom we’ve met before.

One place that has been suggested we visit a number of times is Pfeiffer Beach, where apparently the sand is purple. Being partial to the color purple myself, I was really excited to see a beach full of purple sand. Having had a light day, we didn’t mind biking an extra 5 miles in total to see this famed Beach. Little did we know it meant going downhill a tiny one lane poorly paved road for 2 miles. And that which goes down must come up (or something like that) so we were not thrilled with that prospect and quickly questioned our excursion, but it was too late to turn around! Besides, we totally unloaded our bikes at the campground so we didn’t have any weight to haul back up! Although, riding an unloaded bike after 1000 miles of riding with it being weighted took some getting used to. We felt like baby giraffes learning how to walk for the first time – awkward and wobbly.

Normally a $10 admission fee to enter, we were thrilled when the ranger said bikes are free. “But you’ll have to pay on your way outta here going up that hill” was the next thing she said, laughing almost manically at her joke.

Pfeiffer Beach was gorgeous. Though not as purple as I had painted in my imagination, the hue and essence of the color was definitely very much present in the grains of sand. We got to know those grains of sand very well as they assaulted and sandblasted us. Painful doesn’t even begin to describe it. It felt like we were slowly being eaten alive as gusts rolled through! We soon understood why someone said, “good luck” to us as he walked by, seeing that we were wearing shorts. We just figured it was because we exuded a biker trash vibe and he was referencing the ride back up the hill.

After standing the abuse for only so long and snapping pictures (evidence of wind in exhibit A: the selfie), we had to get out of there. We stopped by the ranger station to see how much of a donation we would have to make to get a ride up the hill in their truck (answer: none; it’s illegal) as a last ditch effort, but we could only put off the climb for so long. And climbing that hill was the second time this trip I had a bad experience with a Volkswagen Vanagon (and considering there are a million out here, that’s pretty surprisingly low statistic). He passed us during the narrowest section of the road and was barely an inch away from us. It was so close I had to stop going up a steep part of the hill to prevent falling into a ditch. We eventually found him in the campground’s parking lot (not easy to hide around here) and gently/calmly let him know it is the law to provide 3 feet of room when passing a cyclist and that if he waited 10 seconds (let’s be honest- Vanagon that old aren’t going much faster than us up hills like that) there was a turn out we would’ve stopped and let him pass. He apologized and promised he would be more mindful. Hopefully we taught him better etiquette for the future!

Tomorrow is going to be one of the more interesting days of the trip… really excited to see what happens, and so should you!