Yesterday was a short, relatively “easy” day compared to the previous couple of days. It’s funny how now we refer to 50 miles as short, and only a few half mile steep hills as easy. But we made it, and have successfully crossed the Appalachian mountains, for the most part. The last 3 days have been the most difficult of the trip and my legs are paying for it dearly. I woke up this morning with a full body hangover that has yet to fully dissipate, but I have faith that come tomorrow morning, I’ll be ready for a 75 miler with rolling hills (fingers crossed).

Yesterday started with a few climbs that got worse as the temperature increased. We had some experiences with more dogs, a jack Russell terrier chased me and almost got ahold of one of my bags. It was the most ridiculous and comedic series of events. A few were incognito and jumped out at us when we were least expecting it, causing Sheena to shriek and find some extra energy to outpedal their attack. As terrifying as the dogs may be, I argue that the drivers can be worse. I was inches from being hit by a woman who was not patient enough to wait for me to clear a parking lot entrance. She rode around me and turned sharply into the driveway, cutting me off. If I hadn’t put two and two together and instantly squeezed my brakes, she would be owing me a new bike. And probably paying for some medical bills too.  I cooled off from the near death experience with a Freeze Pop – a grand suggestion from Alec. 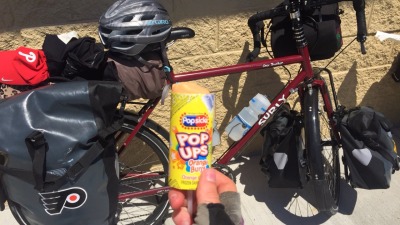 We had the most beautiful downhill of the trip yesterday as we descended down Bighill (with a name like that, you know it has to be good). We went right through a blasted out chunk of mountain and were able to see the last of the Appalachian mountains as we passed through. There were no blind curves so we could cruise without braking. The wind was in our face so that kept our speed nice and safe (no need to worry mom and dad). After that we were basically in Berea, where we have been staying. We had a couple more hills (Sheena fell in a ditch) and ended in a restaurant for some drinks and food. We’re staying in a dorm building at Berea College. They are beautiful and, the best part, we each get our own room! Complete with a real bed! We are living life like kings. 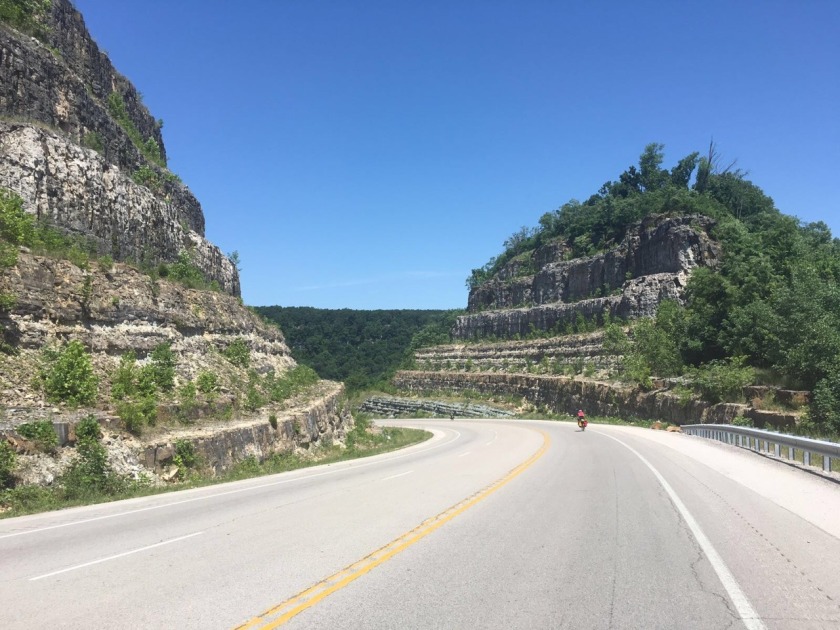 We had a much needed off day today. We did some chores and mainly just relaxed. A few days ago some guys who stayed with us in a church who are also doing the TransAm (in the opposite direction) told us we can get free shirts in the visitor center. Because we are freeloaders, we jumped at the opportunity first thing in the morning. The woman who was working, Maya, was awesome. She was thrilled to see us and told us that she hosts cyclists at her home via Warm Showers. She told us all about the history of Berea and the college. She said that because a lot of coal mines have been shut down recently, kids in the Appalachian region need education, as coal mining is no longer an option. Berea College is tuition free (paid for by grants and alumni donations) and the students are required to work 10-15 hours/week to help subsidize their education. It was really interesting. Later we visited a tea shop and talked with a girl who graduated from the college. She loved the school and found it as a way to leave her home in a not so well off town. The rest of the day was spent napping and doing bike maintenance. We have to rest because judging from our map meeting tonight, this next week is going to be tough, we have a 100+ miler coming our way 😳