This morning was a doozy. Thank God we started it out with coffee at the motel. We should’ve known that starting the day out on a road named “Seven Devils Road” would be pretty darn close to hell. On the elevation maps it showed only two hills that we were mentally prepared for. Turns out it was nothing but up and down for miles on end. Paired with the misty fog and no services for miles, it was like we were stuck in the twilight zone. But after 30 miles of this, we finally found ourselves in Bandon and had a great cup of coffee, breakfast, and a much needed 1.5 hour break.

One thing that’s been super annoying this trip is never knowing what clothes to wear. The nights and mornings are freezing so we bundle up for winter’s worst. We peel off layers as we go, but that’s where it gets confusing. We sweat like crazy going up hill, but later that sweat freezes on downhills. We’re constantly stopping to take off layers only to put them back on 10 minutes later. I gotta say, I kinda miss that heat wave in Washington.

Another thing of note is today all traffic stopped when two deer crossed the road. They show more respect for those two deer than they do for two cyclists – us!

Not much today in the way of scenery. We were stuck in the boonies for most of the ride so once again I zoned out and don’t remember the majority of it. In fact, I passed time by trying to remember what I was zoned out thinking about for 10 minutes. It’s enough to make you crazy.

But we did catch some good coastal scenery our last 6 miles of the ride. Was absolutely gorgeous! Before we started those miles, however, we ran into a couple hitchhiking their way across America. We stuck around to see how long it would take for them to land a ride. Sure enough they got a ride in less than 5 minutes. Needless to say, sheena was not pleased that we couldn’t hitch a ride to our destination. 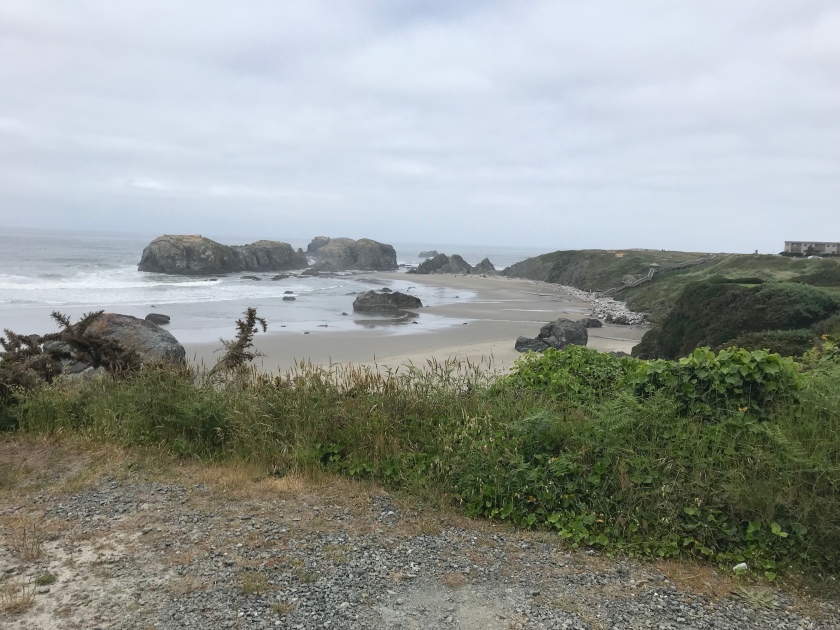 We’re staying at Humbug State Park tonight. It’s very misty out and looks like typical Pacific Northwest, so I love it. Once again we ran into the Norwegians, who will now be renamed The Germans, who had similar thoughts on the horrors of Seven Devils Road. They had a much tougher day than us… a raccoon stole all their food last night, she got a flat tire, and their tent poles broke. But they still have a positive attitude and are nothing but smiles!

Tomorrow we have another hilly day… but it looks like we’ll have tailwinds (they were lacking today). Hopefully they’ll push us through to California!