Today was the kind of day where I wish I could’ve curled up on the couch, snuggled with Addie, and binge watch Netflix. Unfortunately, Addie is thousands of miles away, my couch even further, and Netflix doesn’t exist in the wilderness.

But we made it to California! And what a cold and wet reception we received. The ride in was relatively flat with rolling hills. We hit the Welcome to California sign super quickly… it snuck up on us! We snapped a few pictures and ran into some more German riders going south. We’ll likely run into them again soon. Since we missed the “Welcome to Oregon” sign last week, we quickly got a few photo ops with the sign today. Oregon is the first state we rode through both vertically and horizontally!

After a short stop at the mildly disappointing Pebble Beach, we stopped in Crescent City for some food and to mentally prepare ourselves for the hill we have been warned about for a few days now. When we were right about to leave the cafe, the heavens opened and it started to pour. Thinking it was just a quick shower, we did some grocery shopping. That’s where the locals told me that it’s going to rain all day and going south on the hill would be pretty dangerous. Sheena was warned in the store that going down the hill would be treacherous and a guaranteed way to wreck. Great! 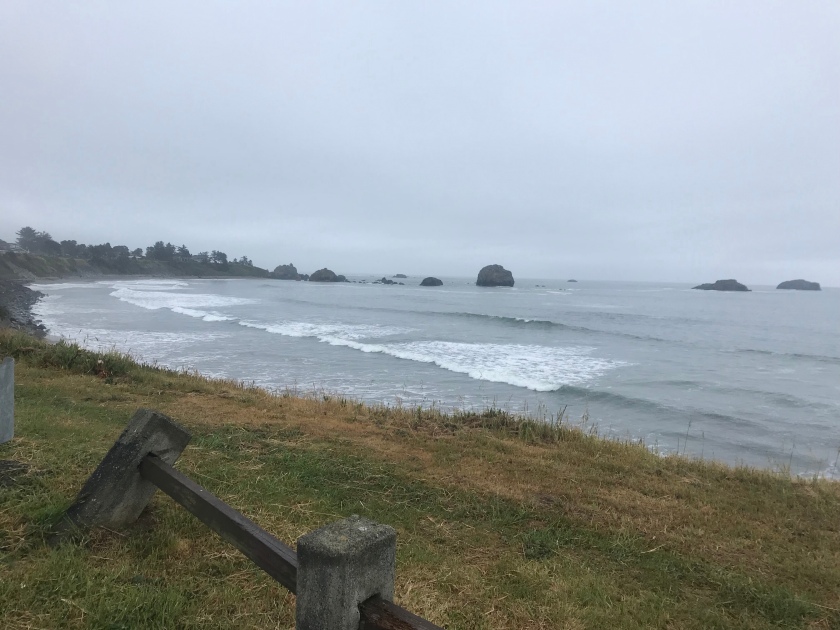 We decided to set up camp in a McDonalds and wait a few hours for a bus to take us to over the hill. The rain was forecasted to continue until 2pm, at which point it would be too late to start our 36 mile journey to our destination. Riding up the 5 mile hill in pouring rain after being warned so many times didn’t sound like a safe idea. While I was ordering, sheena was talking with a local. When I walked over I overheard he had a truck. A shot in the dark and basically joking, I asked if he wanted to give two cyclists a ride. He said yes without skipping a beat. *We stuffed all our junk in his truck and he drove us all the way to Elk Prairie! Jeff is retired from the Peace Corps and worked for a while with the UN. Now he just drives his truck up and down the coast fishing. He drove us the 30 plus miles to the campground and saved our day.

Riding in the redwoods was one of my most anticipated parts of the trip. A part of me is really disappointed we got a ride, but we also have a pretty solid few miles still in the redwoods. Plus, as Jeff was driving, we saw why we were warned. A good bit of the road had absolutely no shoulder with blind turns. Parts were under construction and had steep drop offs. Visibility was extremely limited and I realized that we really did make the right decision. My pride will just have to take a hit.

But despite the danger, the ride was absolutely stunning. We got our first glimpses of the magnificent redwoods and I was in awe. We’re staying in Redwoods National Park in Elk Prairie campground. Because it was still pouring when we got there, we stayed in the visitor center for warmth and to stay dry. We met a young cyclist who started his trip from Bandon, OR to LA two days ago. He and his brother rode in the rain without any gear and they lived to tell the tale. His parents are sagging for the next few days, then he’s on his own. We’ll probably run into him a few more times this trip. The visitor center closed at 5, and it was still raining. We decided to buy ponchos and bite the bullet. We set up camp and later rode back to the visitor center to eat dinner under a porch roof. And thank god we got the ponchos. They kept us warm and dry and provided hours of entertainment. And even as I write this at 8:30pm, it’s still raining. So much for sunny California!

Tomorrow we plan on hiking in the morning here in Elk Prairie (praying the rain stops), then riding 20 miles south to a state park that a ranger highly recommended, where we’ll do some more sight seeing. Between the short day today and tomorrow, we’re considering it an “off day”. I’m super excited to ride amongst the giants of the redwoods!

Ps… to all those who said California would be horrible, you were wrong! Everyone we have encountered in here have been nothing short of awesome, kind, and generous!