Another totally unexpected, random, but truly spectacular day today! We made it to San Francisco, although not all by pedaling. Having gone since Astoria without a rest break (that’s over 2 weeks), we are truly burnt out. With the miles, hills, traffic, wind, and just general mental fatigue from being on the bike, we needed an off day more than anything in the world. Resorting to hitch hiking yesterday only solidified that which we already knew. We wanted to take a few days off in San Francisco but than meant not getting there until Saturday afternoon. We were not in any sort of shape to pedal those miles, so Sheena put out a craigslist ad for a ride to just before San Francisco. Now yes, we know all about craigslist and how there is questionable safety using that site (especially for rides to unfamiliar places. Craigslist killer, anyone?) but Sheena has used it before and never got murdered. Desperate times calls for desperate measures!

And we got a response! After talking on the phone for a while and passing our preliminary vetting process, we agreed on a price and time for Nick to pick us up this morning. Problem solved!

Because the pick up time wasn’t until 10:30am and the rendezvous destination was only a mile and a half a way, we took our time waking up and breaking down camp this morning. At the campground we stayed at, there were 7 other cyclists. Us taking our time, we left before all of them. I don’t know how they get out so late, we’re normally riding by 6:45 am! We had a big breakfast and too much coffee at the meeting place and waited for Nick.

He arrived right on time and we once again shoved all of our stuff into his truck. At this point in the game, we’re pretty much pros at getting our bikes and bags in/out of trucks. We enjoyed an hour long ride into Corte Madera talking with Nick. He had some interesting thoughts on life and some even more interesting stories. In his youth he hitchhiked all around the country and even spent a year living alone in a cabin in Alaska. Now he works with homeless trying to give back to the world in any way he can. When he dropped us off, he said that he didn’t want the agreed upon price but only gas money – he was inspired by our ride and wanted to make it as easy for us as possible. We were thrilled by his generous offer, but still paid the majority of the original price. And then we were off! 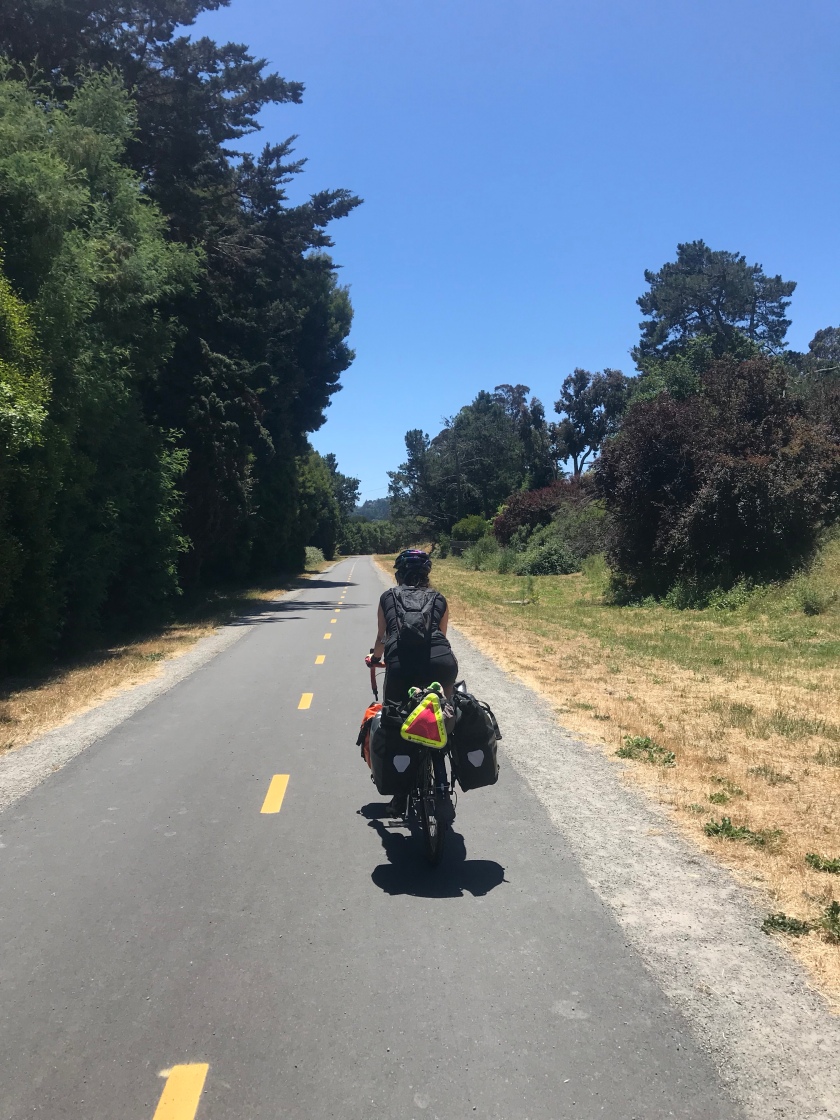 It was a hot day today with lots of bright sun. We only had 10 miles to ride to the Golden Gate Bridge – a major goal for us to ride our bikes over, which is why we got dropped off there. We rode the majority of the ride on a beautifully paved and scenic bike path. Soon we found ourselves in Sausalito where out from the buildings of the small town the San Francisco Bay opened up to us. It was completely beautiful and unexpected. It really was inspiring to see and honestly gave me chills.

After a short ride over some hills, we arrived at the Golden Gate Bridge amongst a sea of tourists taking pictures. So we followed suit! With our bikes in tow. We have to commemorate our achievement (with the exception of a few rides). 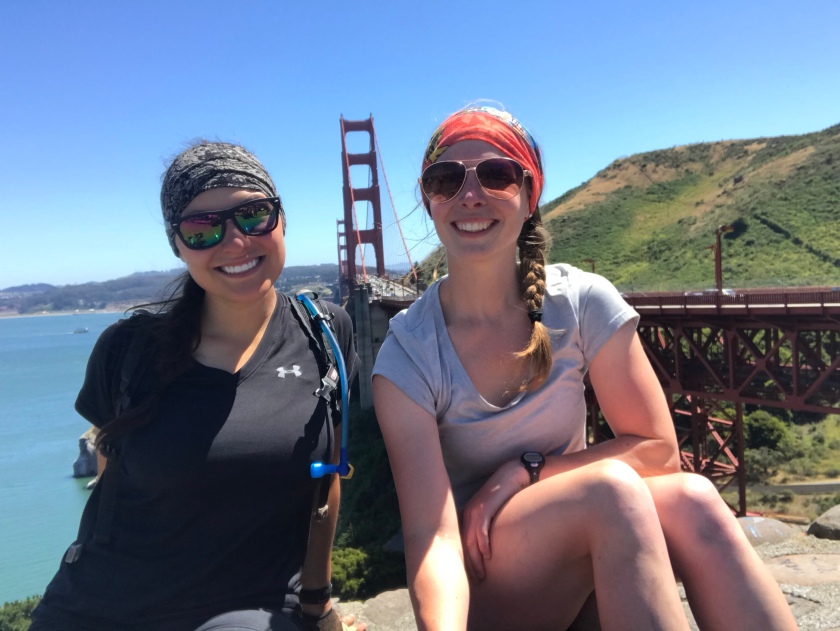 Then the real adventure started. We had to part the sea of selfie sticks and oblivious tourists to get ourselves across the bridge. There was plenty of dodging and yelling so as to not get into an accident and we eventually made it across without any issues besides an elevated heart rate and blood pressure. 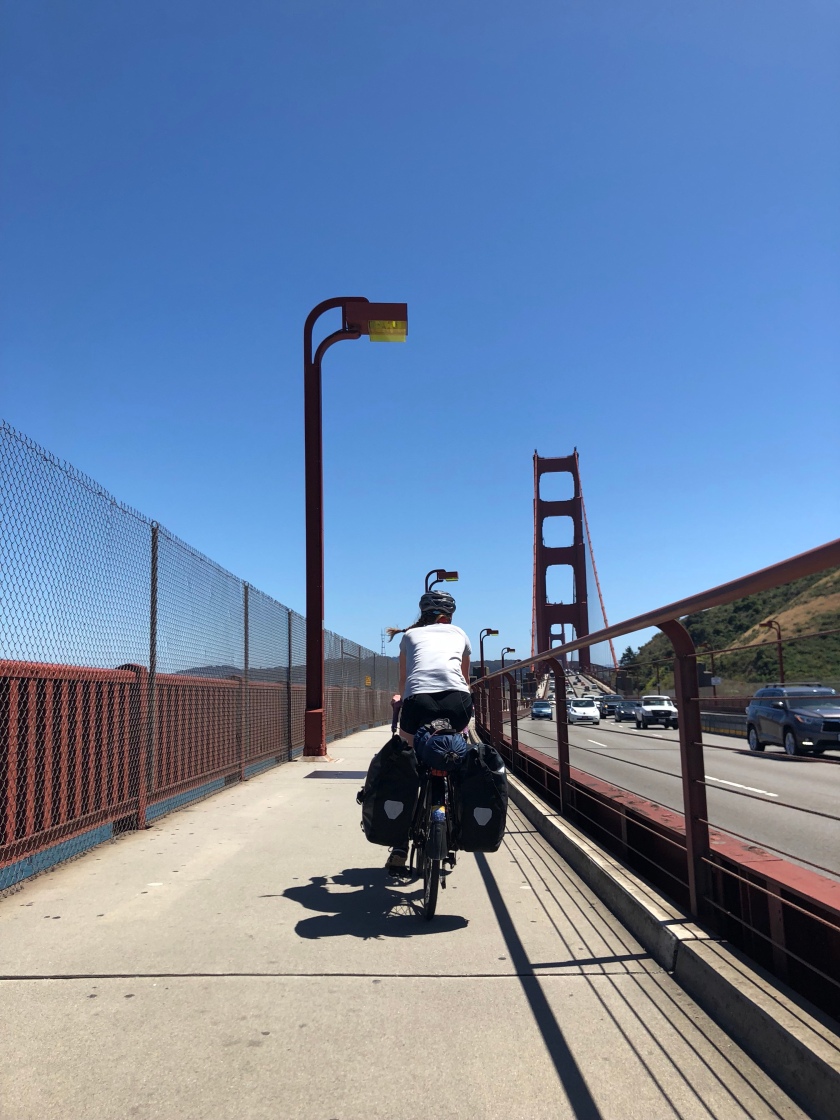 We got our bearings straight after the bridge to let things settle. We still weren’t sure where we were going to stay (warm shower requests went unanswered) so we decided to find a taco place to sit and figure things out. Upon trying to get to the taco shop, we found ourselves lost. Apparently it was obvious we were lost because another cyclist provided us with directions. After hearing about our journey, he asked where we were staying. We responded honestly – we had no idea! “Here, let me give someone a call. I’ll find you somewhere”. In an instant he was on the phone with his mom Mindy and without a second thought, she said we could stay with her the whole weekend! Jesse then was on his way to cross the bridge on his bike. Such a random encounter, but at least we had a place to stay!

We still went to the taco shop to plan our time here in San Fran – particularly figure out a wine tour for tomorrow. After calling around we found ourselves a good deal, booked it, and was on our way to Mindy’s.

What a trek to her house. San Francisco is an incredibly beautiful city, but with beauty comes pain. And that pain comes in the form of hills of mind boggling grade nearly impossible to climb on bikes. Needless to say, we arrived later than we thought to Mindy’s, but she didn’t mind at all! She welcomed us with open arms with a place to store our bikes, shower, bed, and appetizers. She offered to make us dinner, which we declined because we were full from Mexican food and appetizers she presented. I am still in disbelief that we somehow were fortunate enough to stumble upon Jesse and by default landed in his mother’s house. We have no words to describe how grateful we are to have met such giving and selfless people on this journey. I don’t know why people had warned us about California, it’s been nothing but an absolute pleasure!!

We are off to bed, we have an early bus to catch tomorrow to explore wine country!

Sure we might not shower everyday and we’re covered in dirt, old sunscreen, and grease 90% of the time, but boy do we shop at only the finest establishments and order only the best sparkling wine on the menu. But in all seriousness, pretty excited to cross this staple of the southern tier off the list. But as the old man admiring it with us stated - “I just don’t get it”. Same, old man, same 👜 👠 🚲
After a very short lived time in New Mexico, we made it to Texas! We battled high winds and conquered the highest climb of the trip, but made it yesterday. It’ll take us a while to make it across, but if Jesus can make it 40 days in the desert, we can last a month in Texas 🚲💨🇨🇱
Yesterday we made a hard push to get out of Arizona and into New Mexico. AZ was great. We had hundreds of miles of wonderful views, met awesome people, and had powerful conversations with Apache natives that will humble me for the rest of my life. However, AZ was not without hardships. Riding in the dark to get to NM was wholly worth it for a new beginning and an off day! 🌵🚲💨
Riding a bicycle across the country is hardly glamorous. You have to contend with hours in the saddle, battling winds, hills, traffic, and mental fatigue. You have to be comfortable going without a shower for days, nursing saddle sores, sleeping on the side of the road, and being mistaken for being homeless. Your body is just abused. About half an hour before this picture was taken, I had almost had it. After endless climbs and headwinds, I was ready to hitch a ride. But we were met with the kindness of a stranger who bought us lunch and changed everything. With brighter moods, we forged on. And that’s just the tip of the iceberg with the kindness of strangers we have met so far on this trip. And that’s the beauty of touring. Yes, you see the beauty of this country in the most intimate way possible, but you also are a witness to the beauty of its people, who no matter their own situation, are so willing to help others. I cannot wait to pay it forward🥲 🙏🏼🚲