I woke up to the sound of my alarm, ready and excited to get back on the trail.  Though I was glad to have a roof over my head and a bed to sleep in, the Hostel was loud and I missed the quiet comfort of my tent. In fact, I got better sleep in my tent than I did in the hostel!  I went downstairs to grab a quick breakfast and promptly left after getting into a slight altercation with a man who thought he was more entitled to my phone charger than I was.  After dropping out of the JMT due to smoke, he found himself low on battery charge and ordered me to let him use my cord because he forgot his.  I had overheard him telling another hiker how much of a big shot he is in DC, so I told him he could find a cord at the Rite Aid down the street… surely he could afford one there.  I grabbed Big Booty Judy and soon we found ourselves on the shuttle back to Red’s Resort.

On the bus I was relieved to see that I wasn’t the only crazy person going NOBO directly int o the line of fire.  There were plenty of folks doing the same thing!  We got dropped off at 8:30am and I hiked with a group of guts from SoCal who were section hiking.  We passed by the famed Devil’s Postpile.  Not entirely sure what to expect, I was left minorly disappointed by the monument.  Really interesting looking, however, it was such a small geological feature that has accrued so much notoriety on the trail I was expecting a little more.  I stayed with the group until the JMT junction and we played leapfrog for the rest of the day. 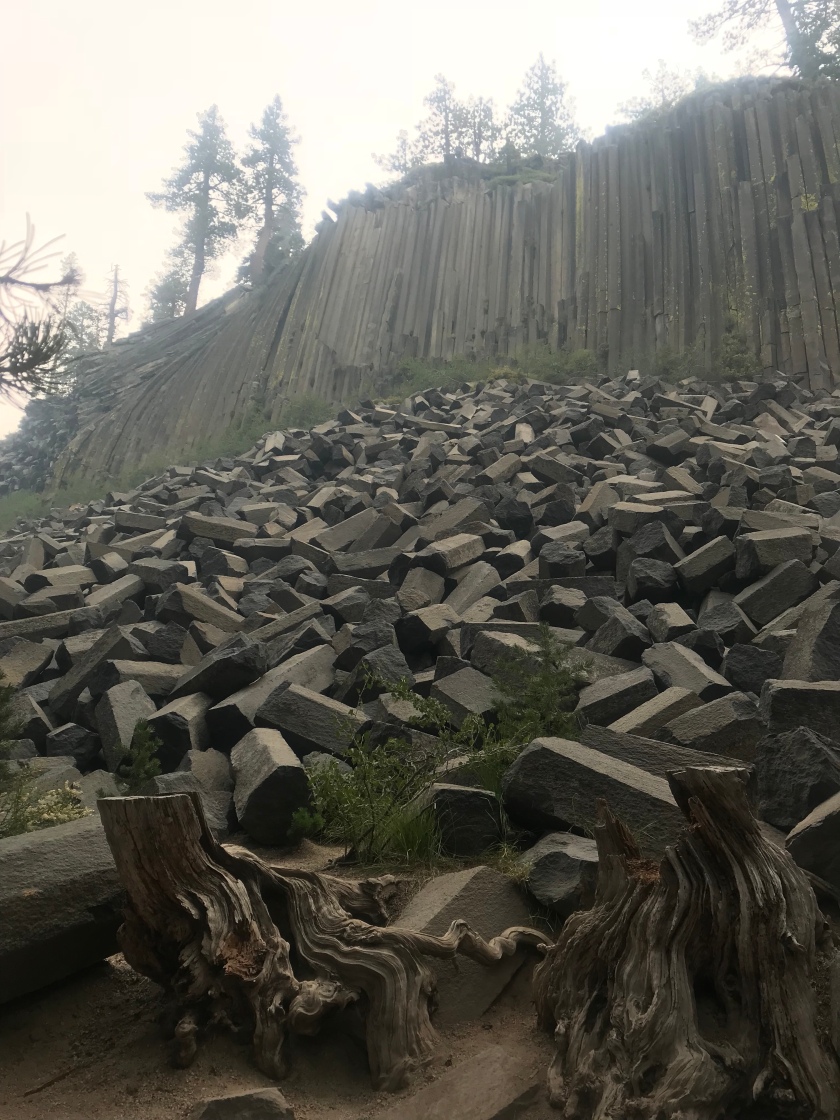 Where I am camping tonight has been an issue of internal debate for the last couple of days.  Originally, I was supposed to stay at Rosalie Lake.  But that’s only 9 miles from Red’s Resort, and I wanted to go a little further to make it to Tuolumne by Sunday.  The problem with going further is there is no reliable water. Jen Warned me of that and gave the recommendation of staying at Rosalie Lake.  When I asked the guys their opinion, they agreed.  They told me to just take it easy, what’s the rush? I wasn’t sold until I actually got to the lake.  It’s beautiful, possibly my favorite late yet! I fell in love immediately and knew I had to stay here for the night.  I found the most perfect camping spot and an even better writing rock! The only problem is that it’s pretty windy and smoke is starting to settle right in the lake. 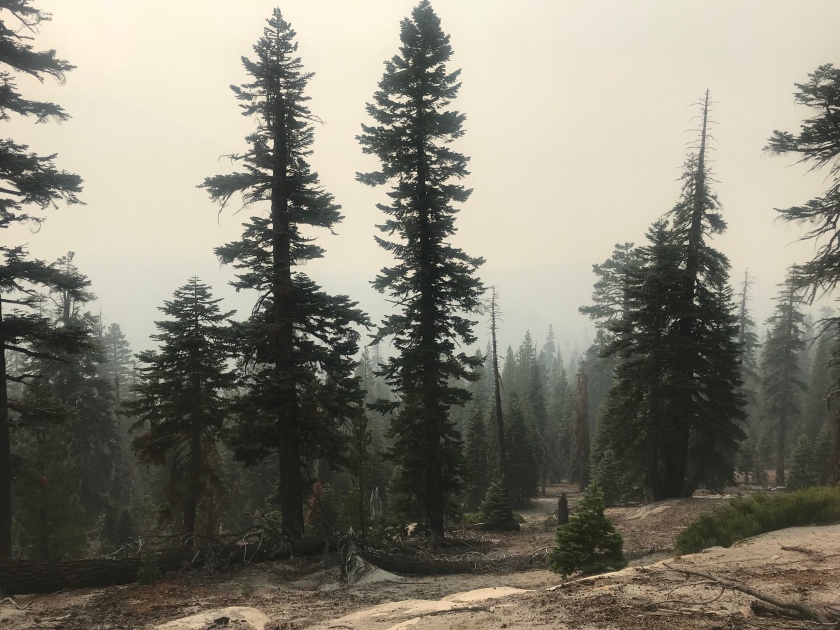 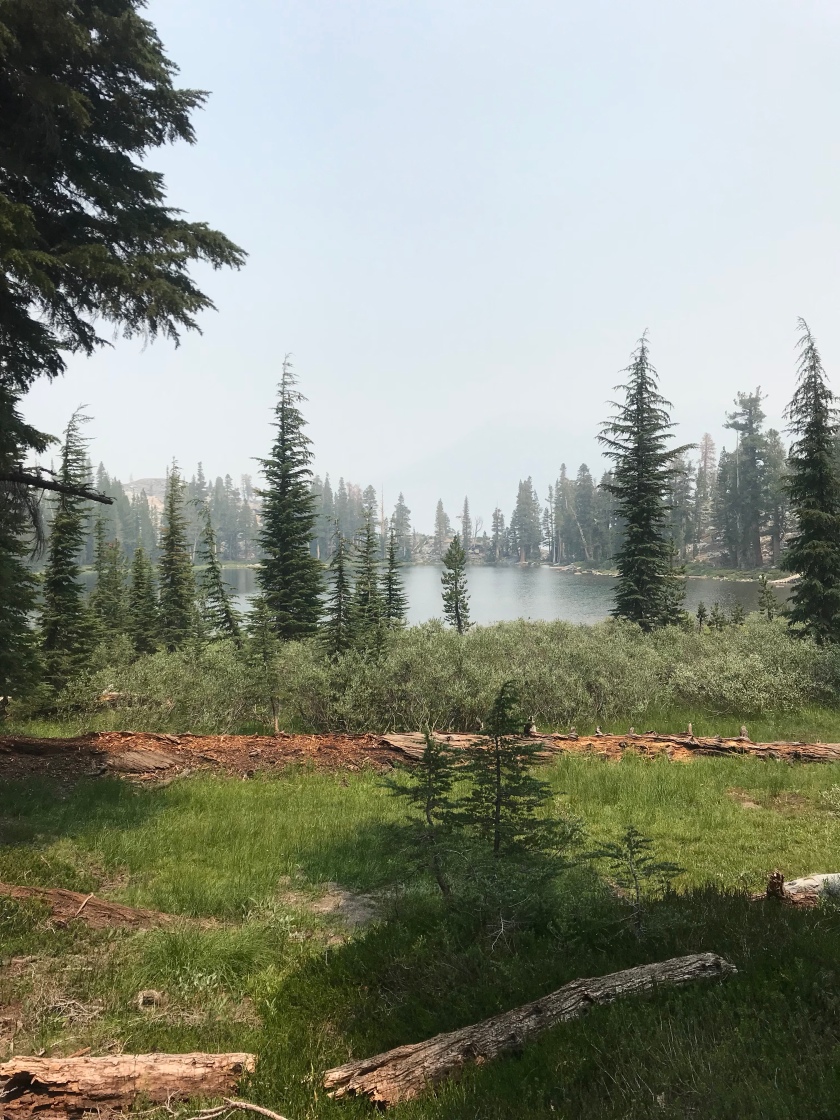 Speaking of smoke, all day it was a very ominous presence, causing an eerie feeling amongst the dead trees I’m still hiking through.  However, it hasn’t really bothered me or affected my breathing.  Someone at Red’s gave me an N95 mask, however, I haven’t had to use it yet.  And not that I’m really planning on using it – it makes breathing harder, especially when hiking uphill. 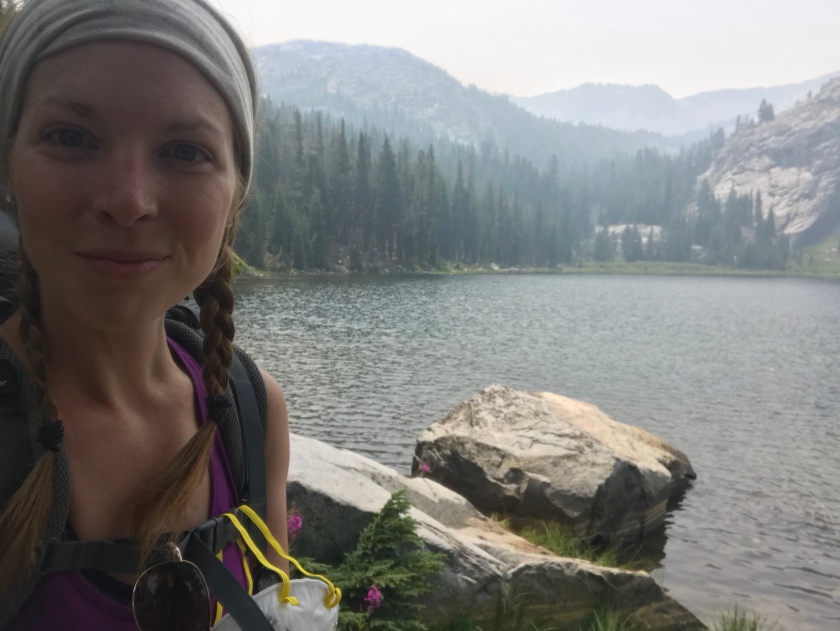 I was really tired today, (maybe it was all the blues at Bluesapalooza last night) so I wasn’t really bummed about calling it quits at 12:30pm today.  I had the whole afternoon to myself, save for a when the guys came over to inspect my campsite after seeing how much better mine was than theirs.  We had a nice conversation about their experiences in the Sierras.  I even taught them the thunder position, something they may find useful considering how many thunderstorms there have been out here.  They had never heard of it before and poked fun at me for even knowing what it was.  All in good fun.

Being in such an inspirational place has put me at peace, something I was definitely in need of after being in Mammoth.  I love it out here and am so sad to think that a week from now it’ll all be over.  I know once I get home I’ll be daydreaming about it out here, wishing I was back in it, despite all the adversity and hardship I have experienced.

The peace and quiet has been interrupted by a group of boys daring each other to jump in the frigid lake.  The air being filled with their screeches allows for some entertainment.  What’s not so entertaining is them urging each other to “just pee – you pee in the ocean, what’s the difference?”.  No – please don’t.  I’m pumping water from there later tonight. 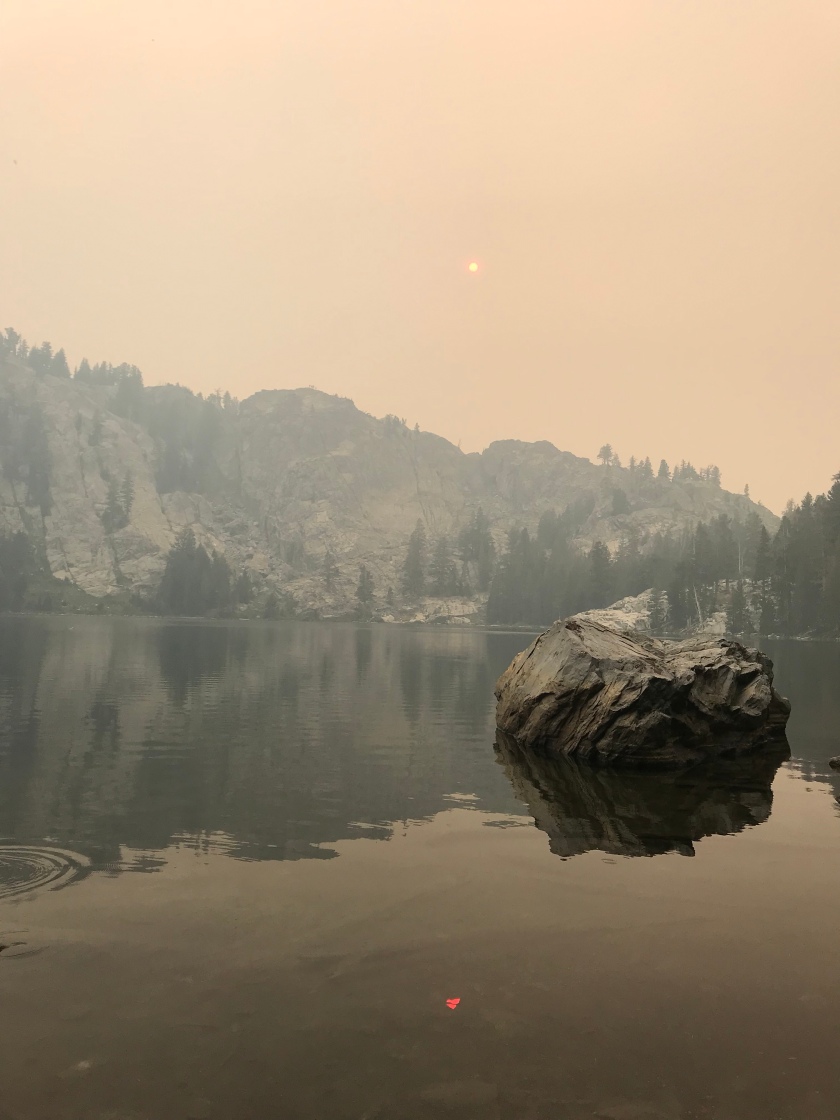 With the smoke, the sun looks beyond spooky.  It look downright post-apocalyptic! After 5 pm it turns bright pink and you can look right at it.  The closest phenomenon I can compare it to is the solar eclipse.  It evokes the same kind of almost primal doomsday feeling.  I’ll be glad when I won’t have to deal with smoke anymore, I can definitely say that.

Reminiscing on simpler times when social distancing and self-isolation were completely voluntary. Missing the mountains terribly 😭🏔⛺️ . . . . . #getmeoutofmyapartment #coronagoaway #threesistersloop #hikeor #optoutside #bendoregon #sistersoregon #southsister #rei #likeamountaingirl #womenwhohike #solotravel #hikertrash #pct
When Mother Nature forces you to cancel your trip to visit @sms817 in Colorado, take your dog to the mountains anyway 😭🌨 . . . . #adventureswithaddie #dogswhohike #hikeny #womenwhohike #hikingdogsofinsta #optoutside #hiketheat #appalachiantrail
I can’t say 2019 was my most favorite year ever, but the 2010’s made for a pretty flipping epic decade!! Still can’t believe some of the traumas I put this old body through and can’t wait to see how much more it can handle in 2020 and beyond 😅💪🏼⛰ . . . #adventureswithaddie #goodriddance2019 #hellooooo2020 #happynewyear mttammany #oneeyeddogs #adoptdontshop #delawarewatergap #apalachiantrail #womenwhohike #dogswhohike #optoutside
Happiest of birthdays to the spunkiest, cuddliest, most courageous one eyed little monster there ever was! And a shout out to The Cat, whose birthday it also is. But he’s a cat so eh 🤷🏼‍♀️ Can’t wait to get this stupid boot off so I can take Addie for a hike she so desperately deserves 😩 Happiest 5th to my little monkey and happy 2nd to my Sweet Baboo 🎉😼🐶🎁 . . . . . #adventureswithaddie #cabinfever #imnotacrazycatlady #butactuallyiam #crazydogmom #crazycatmom #dogbirthday #catbirthday #blackforesttrail #hikepa #ruffwear #dogswhohike #hikingdogsofinstagram #womenwhohike #womenwhobackpack #rei #optoutside #oneeyeddogs #oneeyedcats #dogcatlove #dogcatfriends #adoptdontshop #rescuedog #rescuecat