To quote Sheena, “if Kentucky was hell, then Wyoming is at least purgatory”. And she’s right. Don’t get me wrong, I love the state, but it’s had its share of rough patches. Early in the morning (2am), we were once again assaulted by sprinklers. This went on for an hour, but since I already had experience dealing with these foes and knew it was too warm for it to freeze everything (again) I let the comforting repetition of the sprinklers lull me to sleep, much like the soothing sound of the ocean. I woke up to find that all my clothes for the morning were soaked, along with my sleeping bag, pillow, and air mattress (no wonder I was cold). What a way to start out the morning! I tied all the clothes to the outside of my bike to dry as I rode. I looked like a gypsy with all of it flying around me (see picture below).

We left early to avoid wind (story of our lives now) but were held up when Sheena got a flat. But since she’s had practice, it didn’t take long for her to change it. We passed through Windy River Indian Reservation (appropriately named). It is allegedly one of two suspected burial sites for Sacagawea. Unfortunately, it was 2 miles off route and due to weather reports, we didn’t want to ride 4 miles round trip.

With 20 miles left in the trip, we hit some of the worst head and side winds yet, coming at us from all angles but the back. Of course, just our luck! These miles were also mainly uphill, so we definitely got our resistive training done, enough to last us a year. The downhill patches we hit were also difficult to ride down, mainly because the side winds were so violent they tried to throw us off our bikes. Both Molly and Murph were victims of the wind, but they triumphed unscathed. 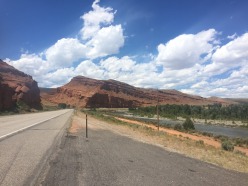 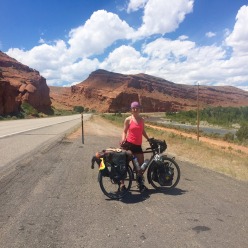 The scenery today was beautiful, but hard to take in due to the winds. We saw gorgeous red rocks and towards the end we saw scenery similar to the Grand Canyon. The views were also difficult to take in due to a persistent nose bleed, likely due to altitude and dry air. The one tissue I had was not efficient for the job. I probably gave a few motorists a minor heart attack as they passed.

The town of Dubois is another tourist fueled small town. It’s really interesting and quaint. Sheena and I decided to rent a hotel room due to insufficient sleep from being attacked by sprinklers all night.

Sheena’s corner: Emilie’s version of The Hail Mary “Hail Mary, who art in heaven…” Bloody noses, flat tires, and 30mph head/ sidewinds won’t keep us from completing each day. I’m continuously impressed with Emilie, myself, and the team for getting up and biking every day despite the knowing obstacles that lie ahead.