***You may notice this is being posted before I’m supposed to be done the trail. Don’t worry I’m still set on completing the JMT – I’m having an off day in Mammoth trying to figure out plans with the raging Ferguson fire ravaging Yosemite!***

After Keith dropped us off at Horseshoe Meadows, we just chilled – literally. Being at 10k’ elevation, we felt a considerable difference in temperature between here and Lone Pine – which is good. Cause Lone Pine was 102 degrees when we left. Because it is so much cooler, I was instantly worried that I’d be freezing at night. But a gentleman I met in LP, Sean from Nashville who just finished the JMT the day before, assured me that would not be the case. “If anything, you’ll be warm!” Reassuring, however, I was still skeptical.

We were enjoying the peace and quiet until a group of barely supervised youths showed up with an arsenal of every possibly weapon. I’m not kidding. From throwing stars, to paintball guns, to machetes, to slingshots, to airsoft rifles, they had it all besides an AR-15. They even assaulted some poor mountain squirrel! They were rowdy and obnoxious. Needless to say, I wasn’t a fan. And neither were a lot of the other campers. Meg, an 80 year old woman who has hiked in the Sierras every summer since she was 8, reported them to highway patrol. Unfortunately there was nothing for them to do about it! Oh well. We went to bed early in anticipation for the first day of the JMT!! 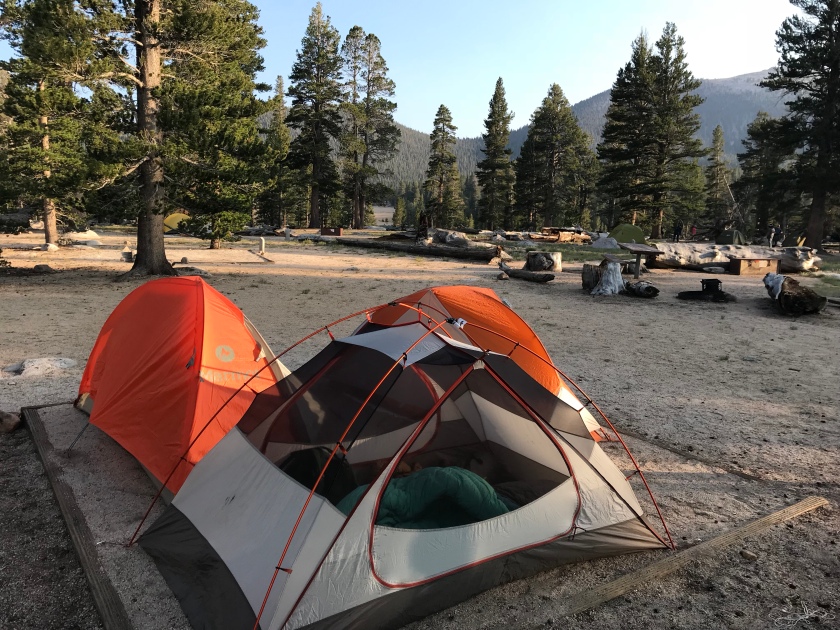 Shocker – we didn’t sleep well. The boys were yelling at each other until midnight until another hiker told them to shut up. I would’ve applauded, but I was half unconscious at that point. We were also visited by a pack of howling wiley coyotes and what I can only guess to be a bear. But fret not – they only made a LOT of noise. They left us alone. The stars were magnificent. It was such a clear night and I was able to see thousands of stars and the Milky Way during my 3 trips to the bathroom.

We woke up at 5:30am and set out for the trail at exactly 7:31am. We couldn’t believe it, we were really doing it! No turning back now. Months of planning and stressing every little detail is finally coming to fruition!!

The first 3 miles were easy. Here I was in my head thinking “Man, I slept okay last night, no issues with altitude sickness – I’ll be fine!” Who Nelly, did I regret jinxing myself. We hit Cottonwood Pass early on. I felt fine the first half of it, but soon I was trailing behind the girls. My heart was pounding and I was gasping for air. Okay, maybe the altitude is something I’ll have to contend with. With some short breaks, I was able to march on to the top of the pass. What a beautiful view! I was only able to notice it after I caught my breath.

We were well over 11k’ and I was feeling it. My heart rate was well over 140 BPM and with a normal resting HR in the 50s with trouble getting it above 100 during exercise, I was not used to feeling my heart beat so violently. It felt like it was trying to break right out of my chest! We took a snack break and trudged (in my case) on. Any kind of uphill of any kind of grade left me breathless. As someone who normally loves uphills, this crushed my spirit. Every 2 minutes I had to stop. My heart rate never went below 120bpm. Soon lightheadedness kicked in. Followed by nausea. Very shortly followed by vomiting. I had NEVER felt so horrible in my life and the sun beating down didn’t help. Knowing I wasn’t even don’t half of the days hike – I sincerely thought I was going to die. But Mary Beth and Sam were so patient and encouraging. They stopped frequently for me and motivated me to press on. And so I did. 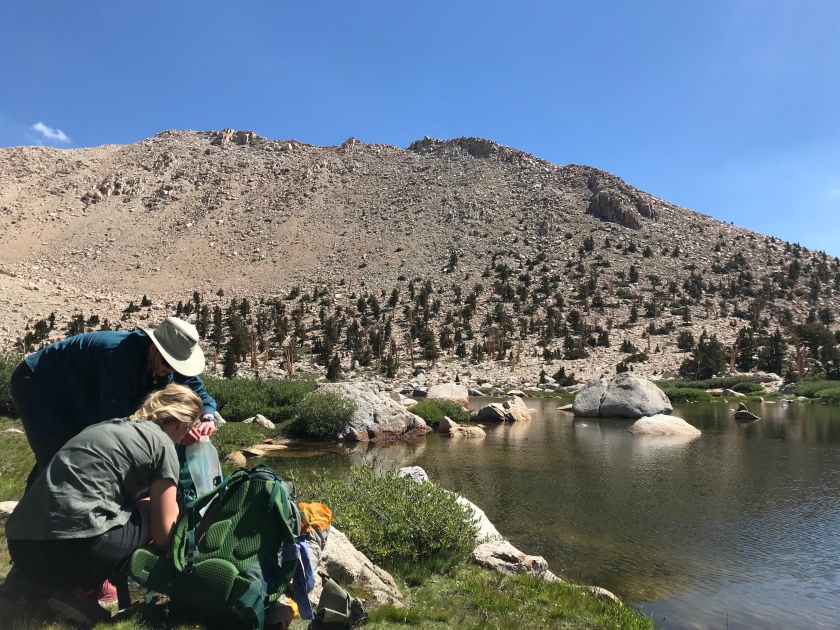 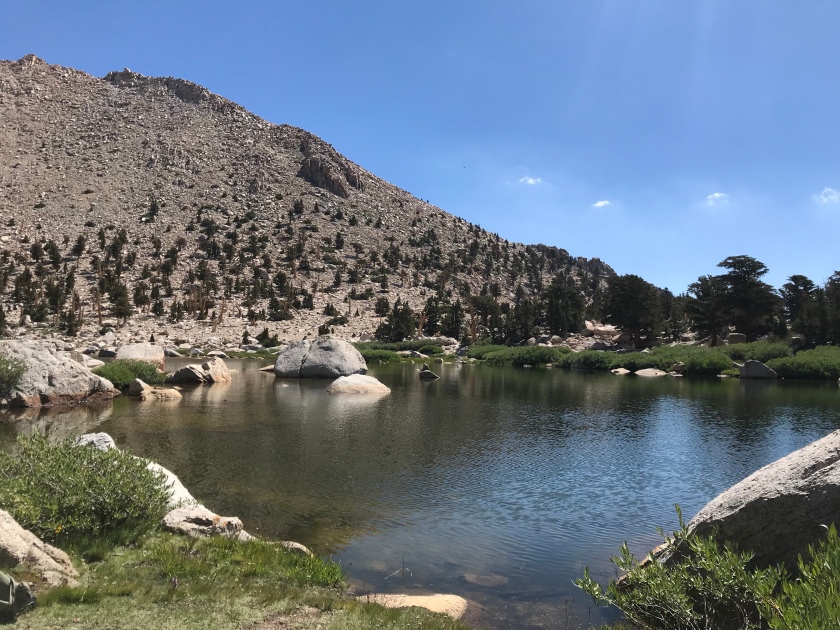 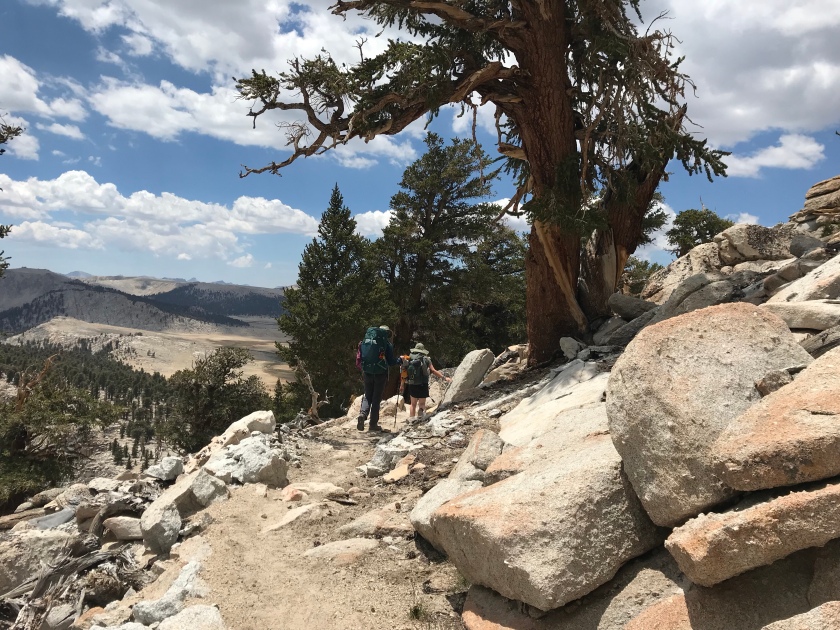 As someone who loves physical challenges and putting my body through vigorous tests, today was easily my number one most physically challenging experience and in top 10 emotionally challenging days to date. Along with feeling that the Grimm Reaper was following me (not hard for him – I was so slow) I also thought something worse – I wasn’t going to be able to complete the JMT. The thought crushed me. But not for long. With only 6 miles left, I remembered my 2 favorite phrases. “Everything is temporary” and “suck it up buttercup”. Drawing strength from the phrases, I was able to complete the hike. Doesn’t hurt that it was all downhill!

If you remember from my last post, I was prescribed anti altitude sickness meds. Why not use them if my altitude sickness was so horrible?! Well you see, I couldn’t keep anything down. Water, food, pills, you name it, it was coming back up. I hope to never feel that way ever again!! As we approached camp, I thought I heard thunder. Just what we needed! Mary Beth checked her handy dandy Garmin In Reach for the weather, which gave a prediction of 10% chance of rain. As we hiked, the skies turned darker and the thunder louder. We were in the 10% zone. The skies opened we marched 1 mile in search of shelter. We tried to wait it out, but it only got worse. We threw up our tents in a frazzled rush. My tent of course got flooded. I maguivered a way of unflooding it by bailing the water out with my coffee cup (never drinking instant coffee again – it’s all I could taste during the vom fest) and my sun shirt. It’s too white anyway. It needed to get a little dirty. And wouldn’t you know – as soon as it was perfectly dry (I was so proud) the sun came out! What a great first day.

With the rain gone, we could cook dinner. Being back down at 9k’, my appetite came back full force after puking out its entire contents and not eating all day. 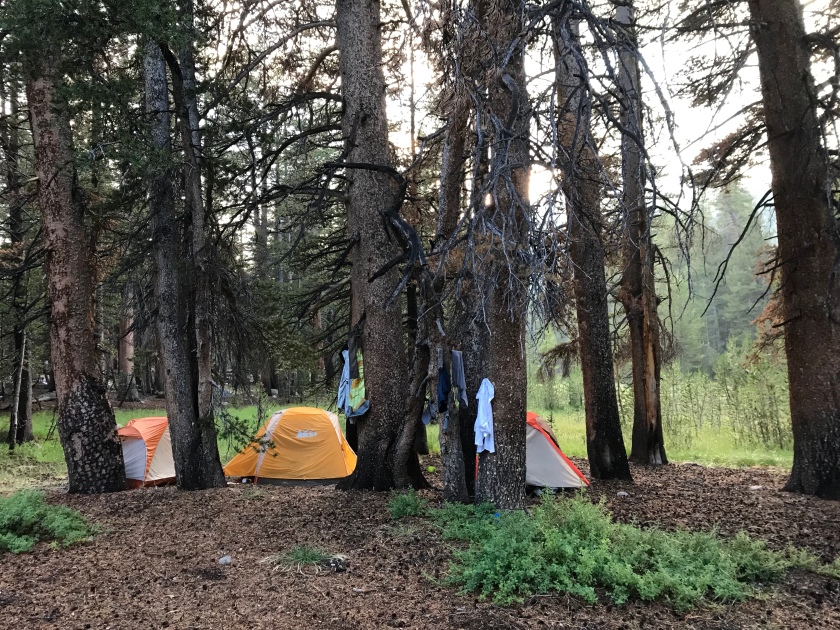 Day one at 14 miles. I always knew this day would be difficult, I just could never imagine how difficult it would be. Give me Mt. Washington. Give me the hills of Washington State on bike. Give me the hot never ending hills of Kentucky on bike. But dear God – don’t ever give me today back again. Despite feeling horrible that whole time, I’m proud. I have never hiked 14 miles in one day (didn’t tell the girls – “oooo that’s why she sucks!”) let alone 14 miles in 10K’ of elevation. I made it when I was positive I wouldn’t. It’s a good day, and unlike the past 5 days I sure wasn’t bored! I’m definitely not acclimated yet, so I’m kind of terrified that today may be repeated soon enough. But tomorrow is half the distance and I can always turn around during Mt. Whitney!