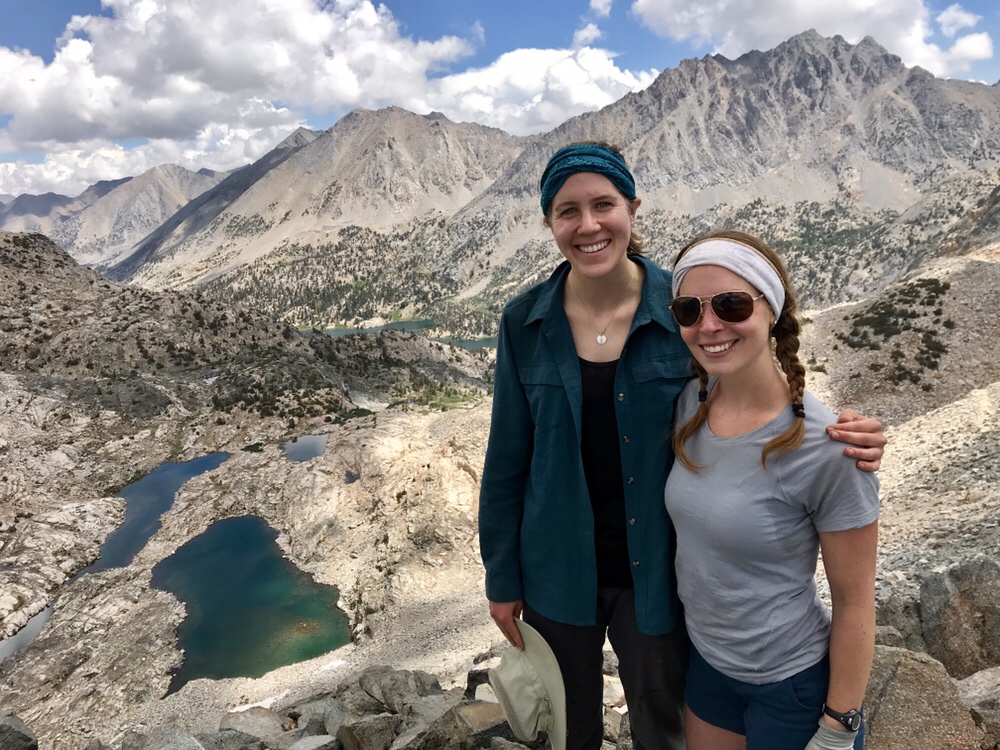 Well, it’s sunny out! But it wasn’t always that way. I’ll get into that later. This morning at breakfast, Sam decided she was going to exit via Kearsarge Pass. She didn’t want to risk getting too far without an escape strategy. A tough decision no doubt, but being stranded in the wilderness doesn’t sound like a fun time either. We only had one mile to the junction. No one expected such a short distance to be so harrowing. It was straight up a steep ascent and took us longer than expected to reach the junction. But we made it. 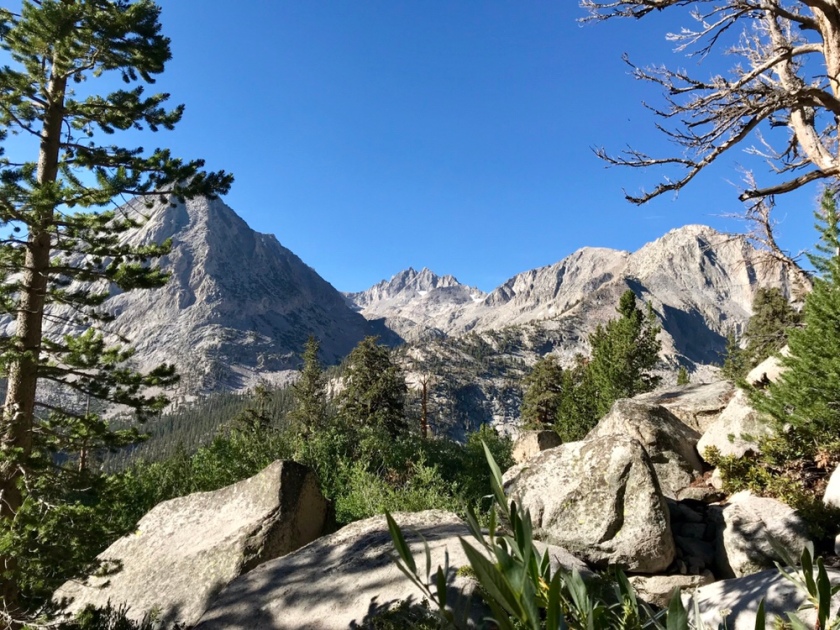 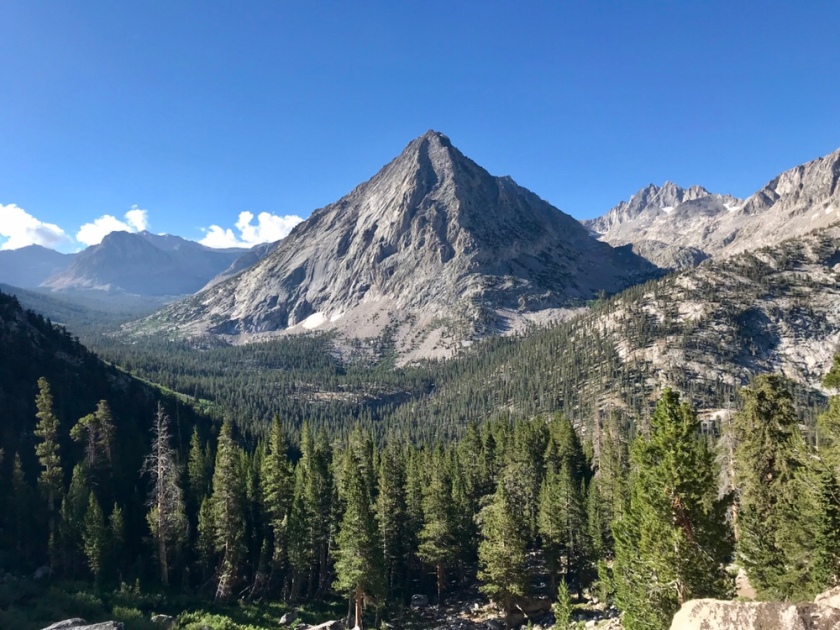 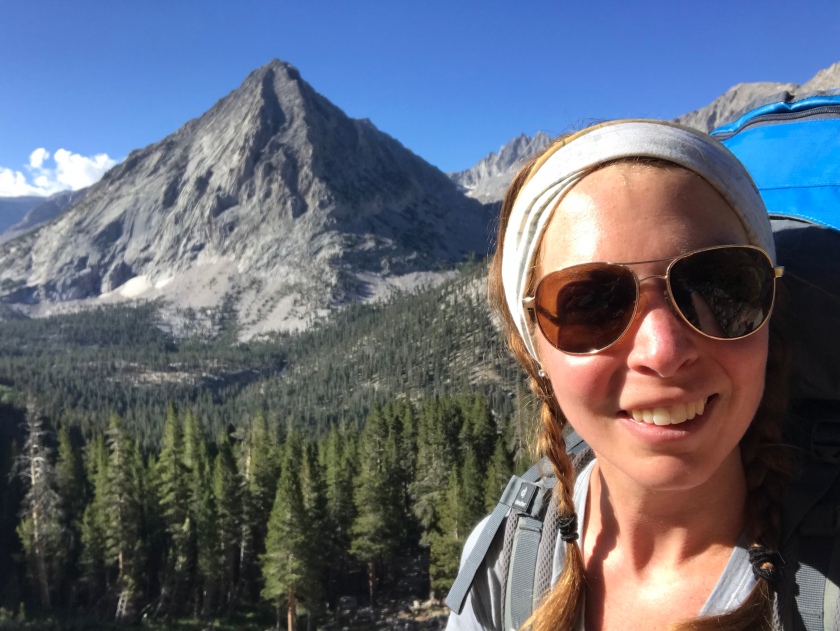 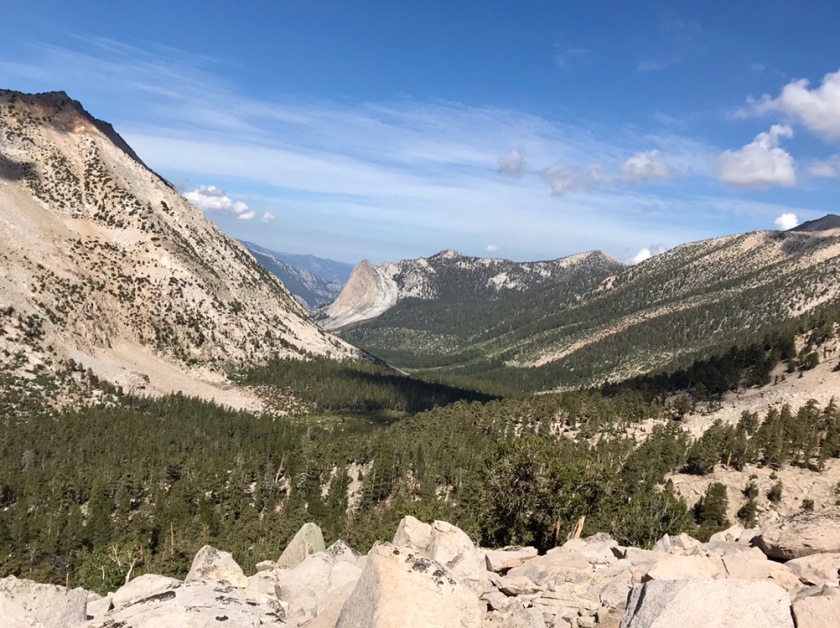 We said a sad goodbye to Sam, but I doubt it’ll be the last we see of her. She’s planning on either re-entering through Kearsarge Pass tomorrow or meeting us at a different entry point further up the road. I couldn’t imagine having to drop out, so I hope she rejoins ya soon. So it’s just me and Mary Beth, for now. Off we went to conquer Glenn Pass. At only 12K’, I didn’t think it would be a big deal. I mean we went up Forester Pass, what’s the big deal?!

Well I was wrong. The uphill from earlier never went away. In fact, it got worse. Up and up and up. Although magnificent, I wasn’t too big of a fan. When I thought we were nearly done climbing, I asked a guy coming down if we were close. “Eh you’re about half way there.” “WHAT?!” I exclaimed in shock. Seeing my reaction, he quickly retorted “okay no maybe you’re 3/4 of the way there. Yeah definitely you’re almost there”. Bologna.

Soon after someone pointed me out the top of the pass. I could see people up there. and a bunch of switchbacks leading up to it. Yep. We were only half way there. So I turned on some tunes and slowly but surely made my way to the top. Marybeth was a little ahead of me and so I went my own pace. Maybe I was tired from the days before, but I thought Glen was way tougher than Forester. It was grueling. I was so focused on getting it over with I didn’t even take any pictures until we got to the top! 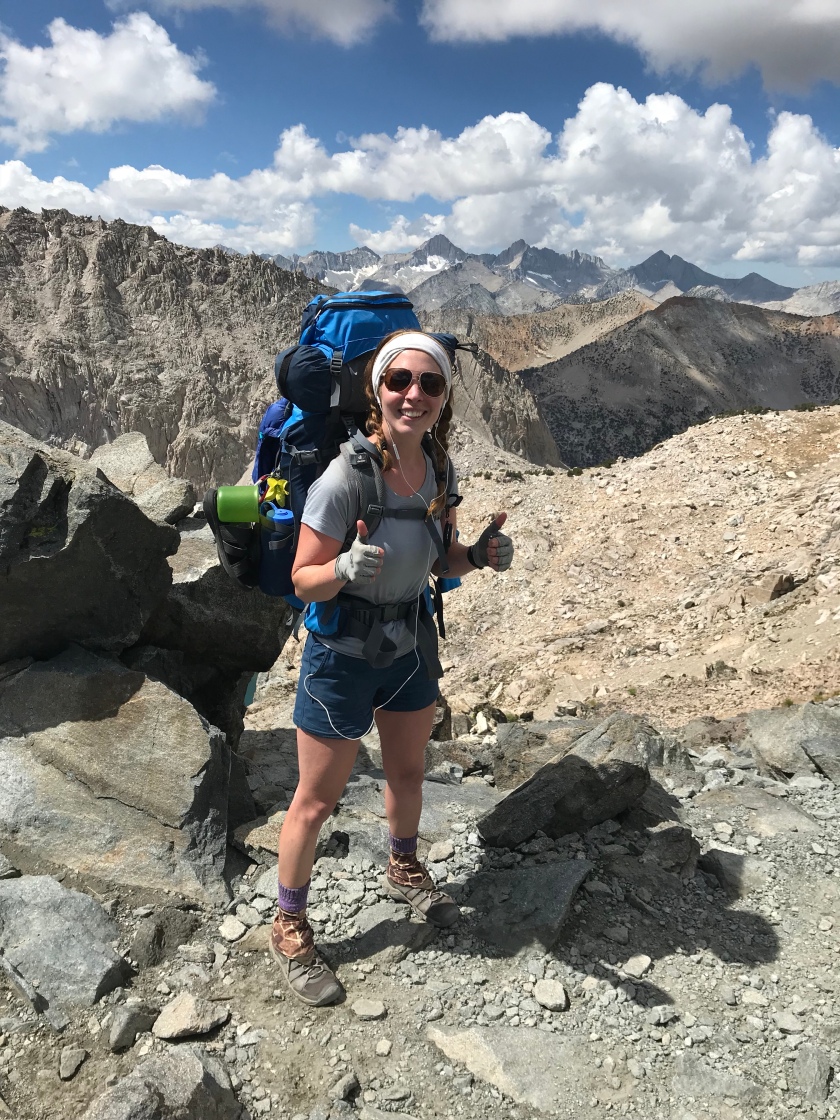 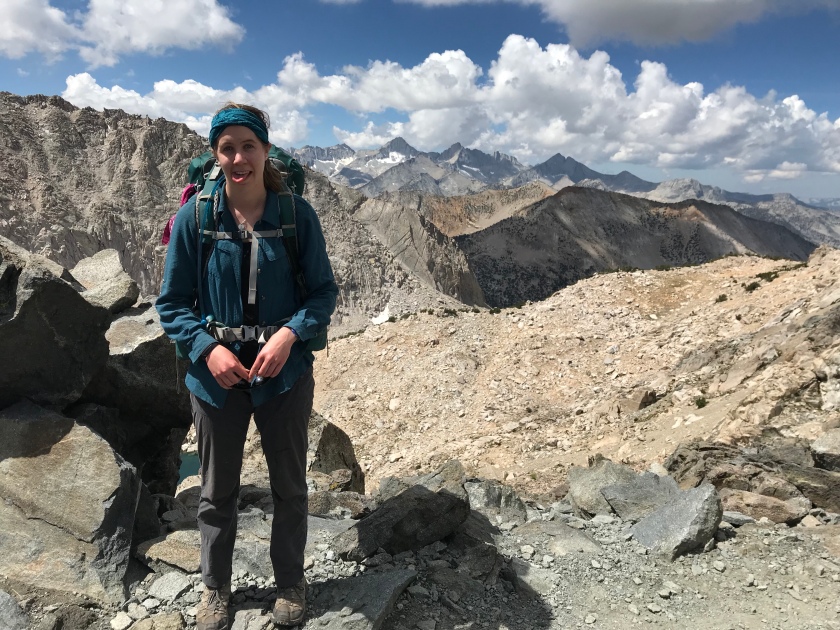 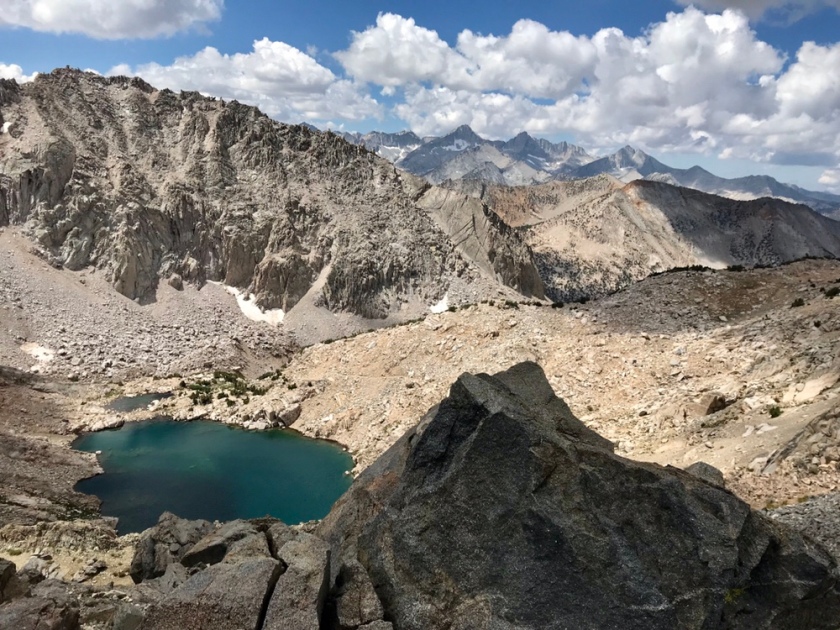 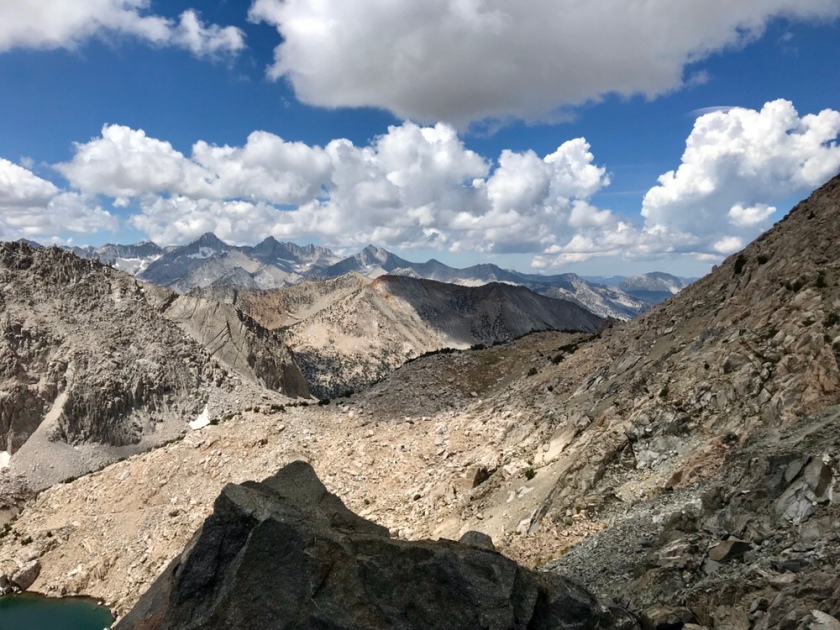 We made it up at 11am. We still had 7 miles to go. After taking some pictures, we talked with some folks up top. Including Eric from Boston, who prior to the trip I had some interaction with on social media. He was the one who gave the great news that the mudslide blocking access to Horseshoe Meadows was cleared. Because of the mileage, we went on our way down.

As horrible as our way was going up, SOBO has it worse. Way worse. More steep and full of rocks, it took us a great deal of time to make it down safely. Eventually we made it down to the beautiful Rae Lakes at around 1pm. It was gorgeous. Marybeth was brave enough to take a dip. I was content just soaking my legs. My knee was acting up so the cold water felt relieving. We didn’t stay long, cause guess who else joined the party?! Storm clouds and thunder too! So off we went to outrun the storm as best we could. 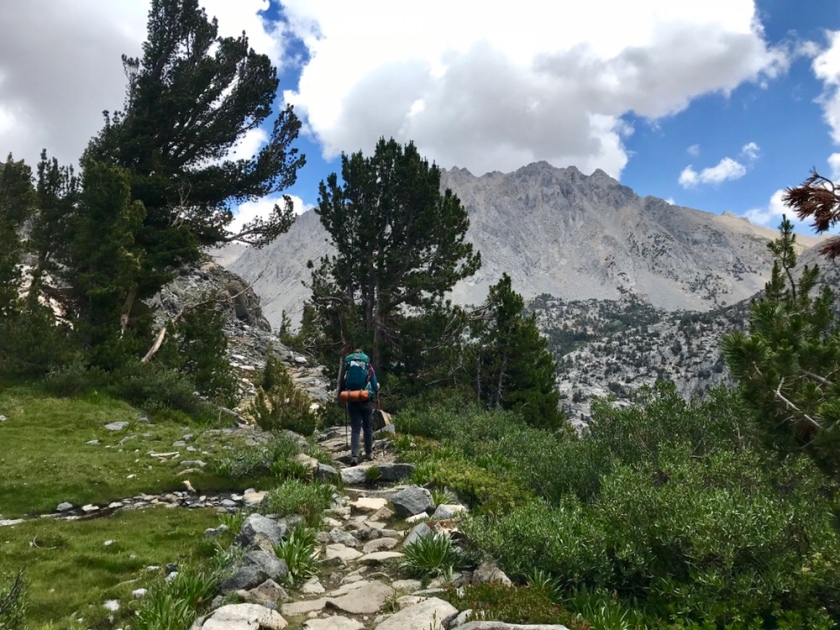 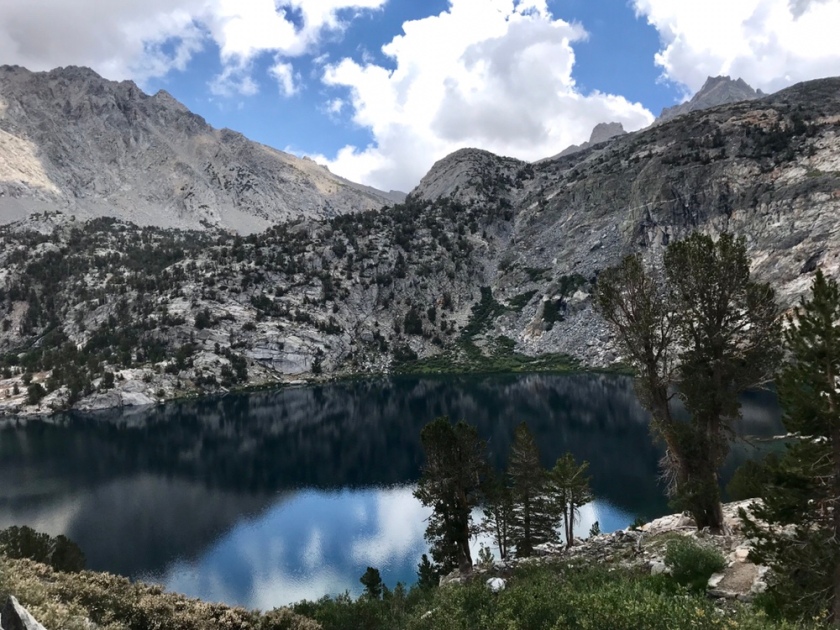 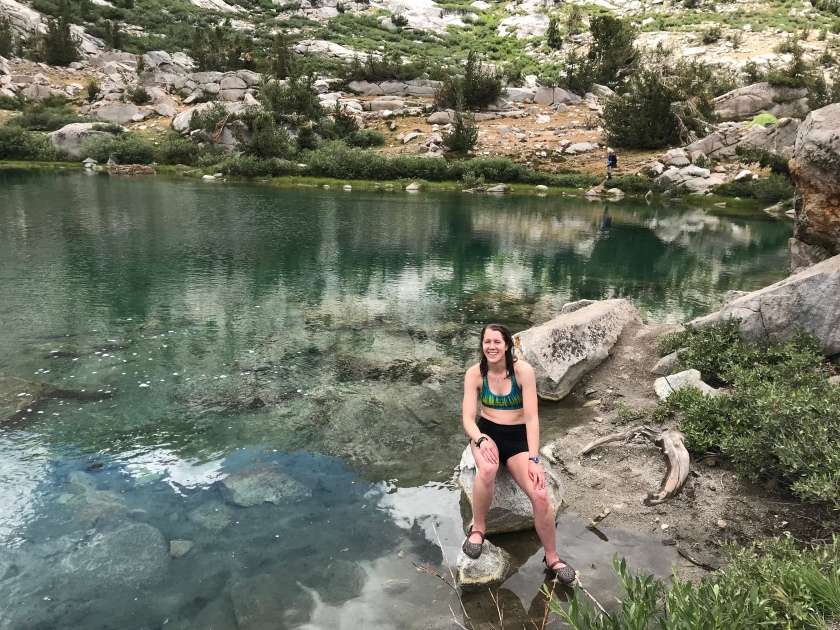 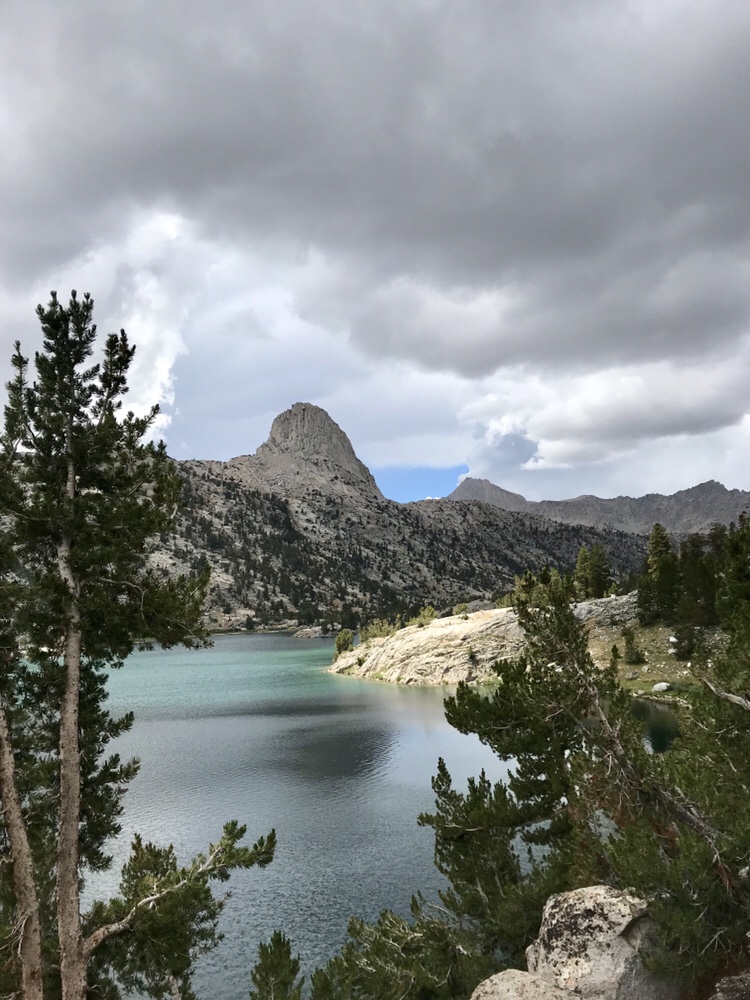 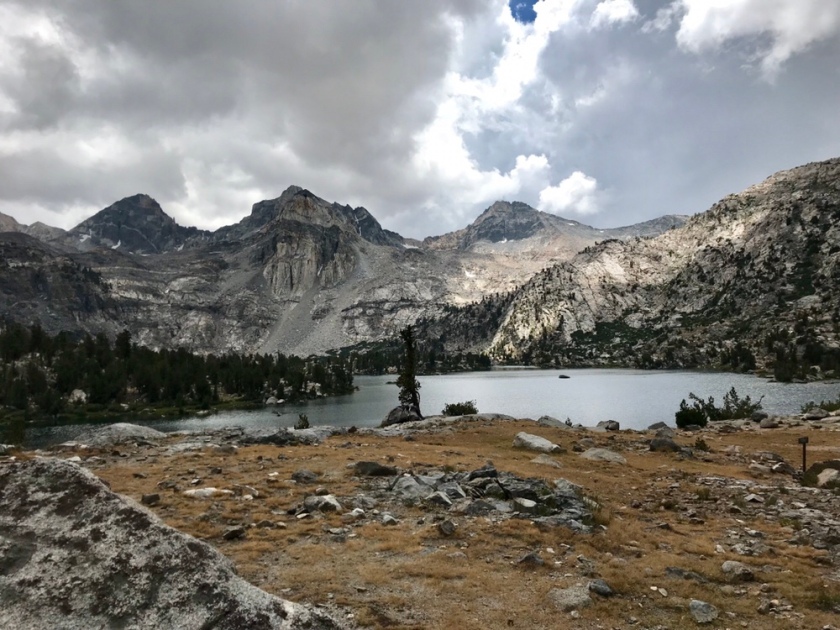 We had our rain gear out and ready to go. We ran into a ranger who said the monsoon moisture was supposed to end “early in the week… and tomorrow is Monday and early in the week, so hopefully this is the end of it?!” Wishful thinking. Right after talking with her we had to whip out the rain gear as it started to pour. After a few minutes, the rain started to hurt. Probably because it wasn’t rain at all, but it’s more spiteful cousin hail. The lightning got worse and we were pretty darn exposed. The first tree patch we came across we ducked for cover. In the midst of the confusion, I stepped on my sunglasses, greatly deforming them. After a few minutes things tamed down and we departed only to duck for cover again in 1/4 of a mile. The hail was a lot bigger that time around. Again it stopped and we only had to contend with thunder and rain. Alright… 4.1 miles to go. 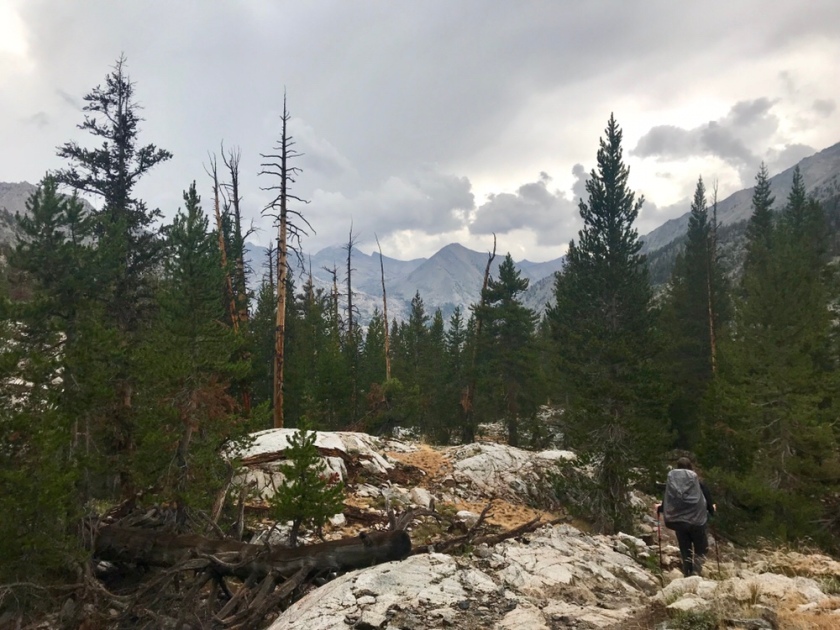 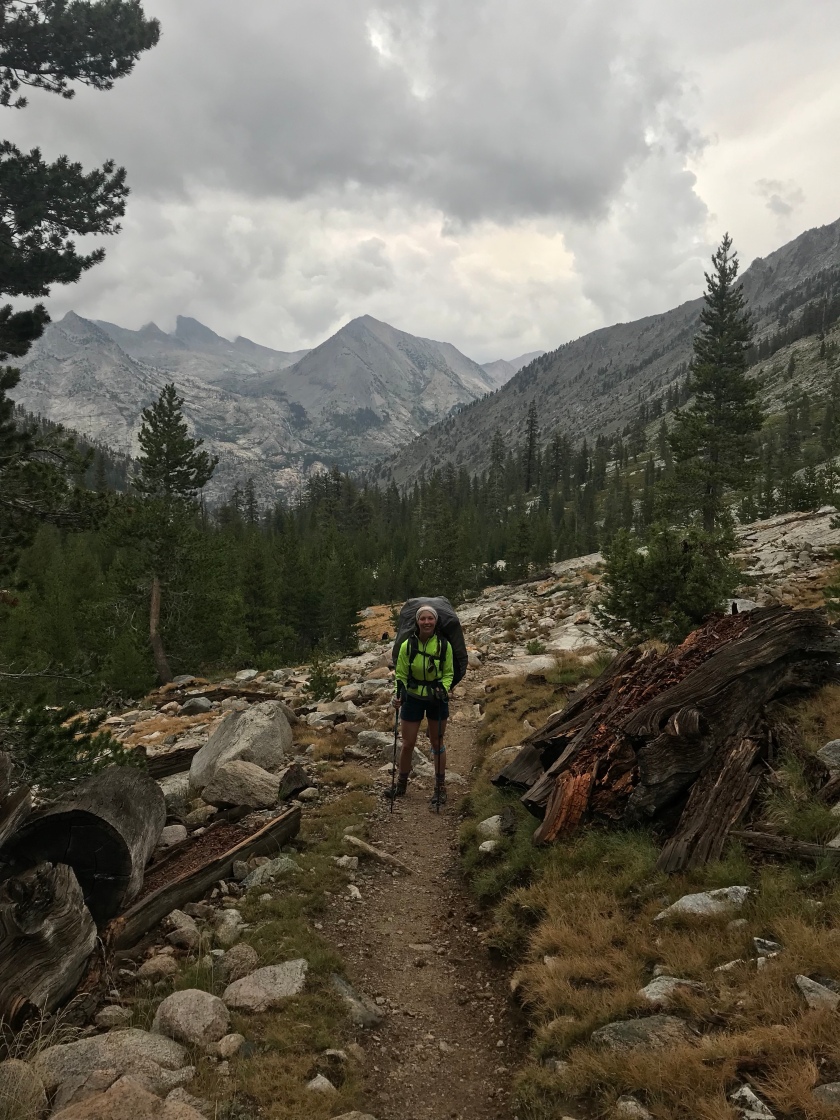 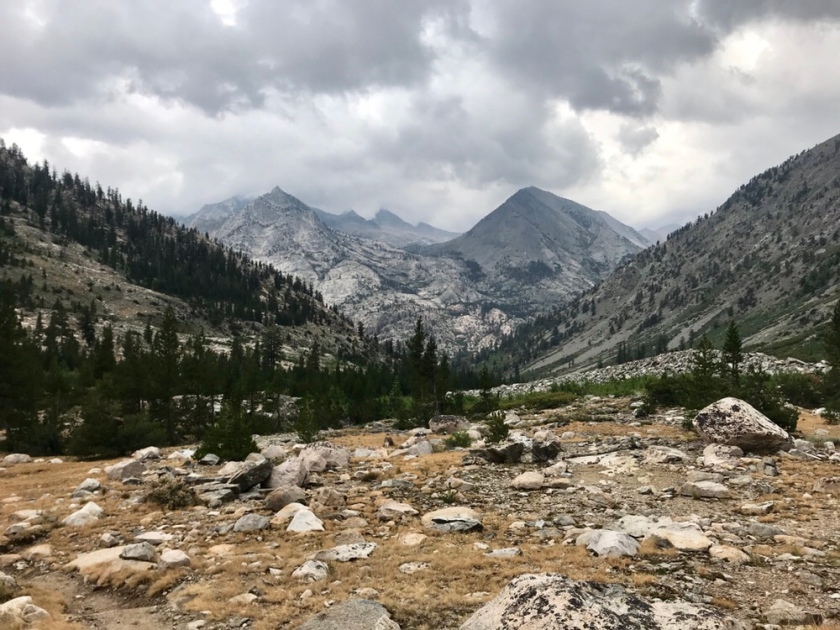 Those were the longest miles yet. They took forever with periods of on and off rain. But we were not without a view. There were magnificent views of sweeping mountains ahead. They were huge and I was in complete awe of them. I loved looking at them as we got closer and closer with every step. They looked so far away at first I thought for sure we wouldn’t get to them until tomorrow. But when we finally rolled into camp I realized we were right at their base. I guess walking isn’t so slow after all!

It was 5:30pm by the time we got to Woods Creek – much later than normal for us. We both were starving. I was down right hangry. But with lightning in sight and rain about to come any second, priority number one was setting up tents. Which was no fun. To make things worse, a woman was just staring at us fumbling around. In my hanger rage induced state, I stopped what I was doing and stared right back. I didn’t care that my tent was going to get soaked, I had a point to make. Our stared own lasted a good 30 seconds before she got uncomfortable and broke eye contact to retreat back into her already set up tent. Once again, the infamous death glare of Emilie Keane strikes again! But I digress.

After the crisis was averted, we filled our bellies and did some after dinner stretching. Marybeth left early and while I was finishing up, I heard yelling and whistling. It sounded like someone was calling a dog. I instantly turned my head and saw the cutest fluffiest butt (2nd only to Addie’s, of course) running away. “Oh my God, Sheena, it’s a bear!” (I’m not sure why I yelled out Sheena’s name – it must be muscle memory from getting her attention on the bike all the time). The guy chased the bear right out of the campsite. First beat encounter! The drama caused the woman who I had the staredown with to come over and tell us the ranger told her there was a very assertive bear patrolling the campsite. Not aggressive, the bear was just a curious little guy. She turned out to be a really nice lady from France doing the Rae Lakes Loop with some friends. 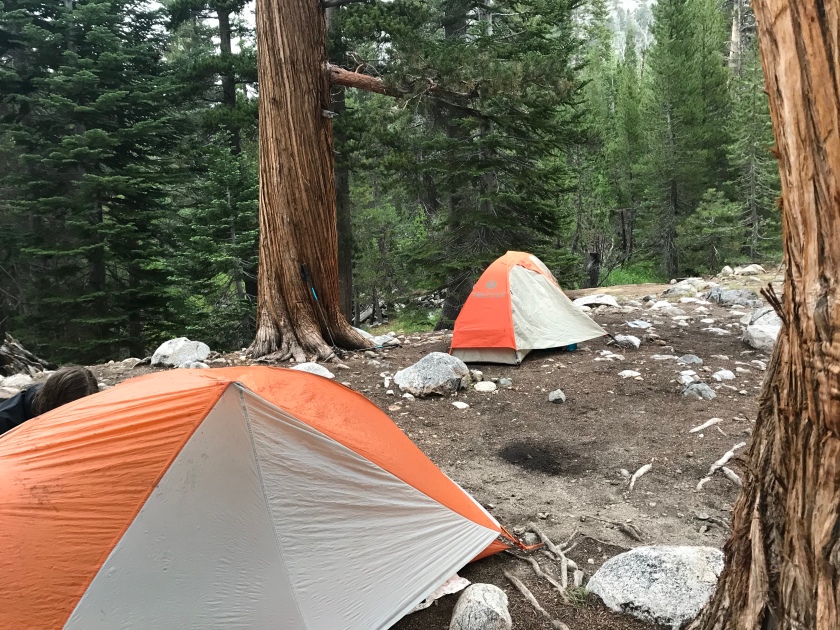 So with nearly a week on the trail, how’s my body holding up?! Great! That is until today. Starting with my feet – they need a good rubbing. Too bad they’re so disgusting no one would be crazy enough to go near them. Skin is still sloughing off and I discovered a new blister on my big toe. Probably because I got annoyed with river crossings and just walked through sigh my non-waterproof boots. Plus they were already wet from the rain! My right hip started to hurt in the morning going up the pass. But that went away on the downhill, only to be replaced with the before mentioned knee pain. Everything better get its act together soon!

All in all, today felt like the longest day yet and was my least favorite day. We all have bad days, right?!

*While looking back on this day in present time, it was one of my favorites in retrospect. It’s one I remember most vividly and fondly*